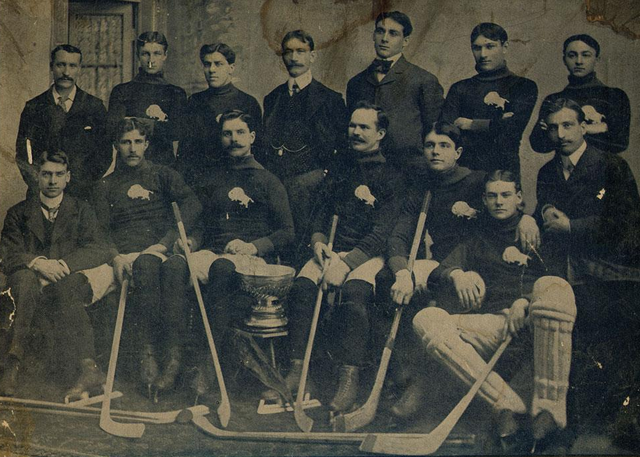 On January 29 & 31, 1901, the Winnipeg Victorias again challenged the Montreal Shamrocks for the Stanley Cup. This time, Winnipeg prevailed, sweeping the best-of-three series with scores of 4–3 and 2–1.
Game 2 was the first overtime game in Stanley Cup history with Dan Bain scoring at the four minute mark of the extra period.

The Games were played at the Westmount Arena (Montreal Arena) in Montreal, Canada.

The Cup trustees next accepted a challenge from the Toronto Wellingtons of the Ontario Hockey Association and scheduled a two-game series for January 21 & 23, 1902.
The first match was played under Ontario rules, curiously with the Toronto Wellingtons wearing Winnipeg uniforms. Despite leading the game, 2-1, at the half, the Winnipeg Victorias proved to be much too strong, storming back for a 5-3 victory.
The second game was played under Manitoba rules with Toronto back in their regular uniforms. For the second consecutive game Winnipeg proved to be much too physical for the Ontarians, winning again by a 5-3 score.