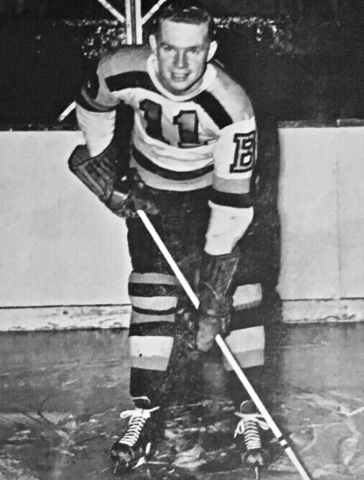 Gallinger then made the jump to the National Hockey League / NHL at age 17, playing 48 games during the 1942-43 season. he scored hist 1st NHL goal on November 24, 1942 vs Bert Gardiner of the Chicago Black Hawks. He had 14 goals, 20 assists in his rookie season. Gallinger also made NHL history during the 1943 playoffs, when he scored the overtime winner vs Paul Bibeault of the Montreal Canadiens on March 21st - becoming the youngest player in the NHL to ever score in overtime (17 years old), a record that will never be broken. He had 3 goals, 1 assist in the playoffs that season.

Gallinger played 23 games for Boston the next year, but finished his season with the Toronto Bowser Orphans in the Toronto Metro Hockey League / TMHL.

Gallinger then missed the next season, as he served in the WWII campaign for Canada. He did play some Hockey during this time with the Winnipeg RCAF, but was back with the Bruins for the 1945-46 season. He had a career high that year, scoring 17 goals, 23 assists, and led the Bruins in points. He had another 2 goals, 4 assists in the 1946 NHL playoffs, helping the Bruins reach the Stanley Cup finals.

He played 2 more seasons in Boston, until it was discovered he had become involved with James Tamer, a Detroit gambler and convicted criminal, and started to bet on games the Bruins were playing in. The story goes, Billy Taylor, a Bruins teammate convinced Gallinger he could make $500-$1,000 a night – double his yearly salary – betting on the Bruins to lose. So they did, but only on games in which they thought Boston would lose anyway.

Eventually wire-tap evidence caught a number of phone calls made by Gallinger and Taylor to James Tamer. In February of 1948, a conversation was recorded between Gallinger and Tamer. Gallinger informed Tamer that he wasn't feeling like he'd play very well tonight, and also that Boston would be without a key player. Tamer then called Taylor and told him to bet $500 that the Bruins would lose. The Detroit police passed the information about the call to the NHL. The wiretaps were illegally obtained, so the police were not able to press charges against either player. However it was enough evidence for Campbell to take action.

In private interviews with Boston GM Art Ross, Gallinger maintained his innocence, fearing admitting what he did would shame his father. Ross approached Gallinger's father, offering to send Gallinger to a psychiatrist in Toronto. Gallinger's father presented to idea to Gallinger. Years later Gallinger would realize that Ross was offering him a way out, but at the time he missed it and turned it down.

One of Gallinger’s biggest mistakes was that he denied any wrongdoing and only confessed to his indiscretions after the evidence against him was so insurmountable it couldn’t be refuted.

Gallinger later admitted the details of the operation. "My bets varied from $250 to a $1000 a game," Gallinger said "My instructions from the guy," he continued, meaning Tamer, "Were to bet on what I knew of the team's attitude and our injuries." Gallinger insisted that while he began to bet three months before the scandal was disclosed, only eight or nine games were actually involved.

On March 9, 1948, Gallinger was suspended indefinitely from the NHL.

Billy Taylor never once asked for a pardon, but Gallinger never gave up the quest for reinstatement. In 1951, 1955 and 1963 he made desperate appeals. The NHL never wavered.

Without the protection of a union and with the wrath of Campbell falling upon him, Gallinger was doomed. One thing that irked Gallinger after the fact was that Babe Pratt of the Toronto Maple Leafs was found guilty of gambling on Maple Leafs victories in 1946 and received only a nine-game suspension because he owned up to his misdeeds immediately. Twenty years later, Pratt was inducted into the Hall of Fame.

Campbell, eager to stamp out players betting in the NHL, would not give Gallinger the same treatment. Gallinger was given a lifetime ban. After Pratt's incident, the NHL had changed its bylaws to make it impossible for a player to appeal a punishment if they had been found to have bet on a game.

In 1970, Gallinger's and Billy Taylor had their suspension lifted.

Nobody knows how good Gallinger could have been as an NHL player if he hadn’t gotten involved in the criminal underbelly of gambling. He was a terrific skater, a heads-up player who could play both ends of the ice, and he had a very respectable 65 goals and 153 points in 222 career games when he was banned. It’s doubtful he would have followed his childhood pal Kennedy into the Hall of Fame, but he likely would have enjoyed a long and productive career.

At the time of his death in 2000, Gallinger was living in a 10-by-15-foot apartment in Burlington, Ont. His son Don Jr. said his father’s living space was crammed with old newspapers and articles about his own hockey career and attempts to have his name cleared. Only about a dozen people showed up to his funeral in his native Port Colborne, Ont. One of them was his childhood friend and Hall of Famer Ted Kennedy. Several business ventures had failed and he wasn’t a rich man. His NHL retirement income was $37 a month. His son paid the $8,000 to give his father a dignified burial.