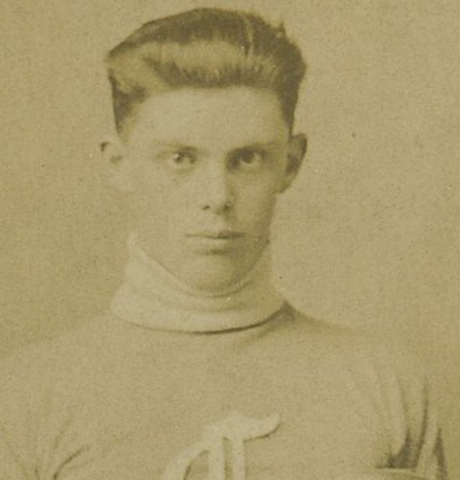 Sherf played lots of pond Hockey as a youth growing up in the mining town of Calumet, and would later be a star forward on his Calumet High School Hockey Team.

After high school graduation, Sherf played 2 seasons for the minor-pro Calumet Black Hawks, before a local physician took an interest in Sherf and provided him with a scholarship to attend the University of Michigan in Ann Arbor.

Sherf was chosen as a member and captain of the 1934 Associated Press Midwest Collegiate All-Star Team and was selected again in 1935.

During his senior year at Michigan, Sherf was selected for the prominent senior men's honorary society, Michigauma. The honorary society was based on local American Indian traditions and each inductee was given an Indian name consistent with his college activities in the induction ceremony. Sherf's Michigauma name was "Flashing Feet Sherf", noting his skill as a Hockey player.

Sherf graduated from Michigan with a BA in History in June, 1936.

Before he was awarded his degree at the annual commencement ceremony, he was signed to a contract by the Detroit Red Wings of the National Hockey League / NHL. He played several games at the end of the 1935–36 season with the Red Wings top farm team, the Detroit Olympics. He was also called up to play with the Red Wings during the Stanley Cup playoffs that season. The 1936–37 season was Sherf's most memorable as a professional. He played with the American Hockey League's Pittsburgh Hornets, after the Detroit Olympics were moved to Pittsburgh and renamed. At the end of the 1936–37 season Sherf was called up by the Red Wings for the playoffs to help defend their Stanley Cup championship. He collected one point in five games as the Red Wings won their second straight Stanley Cup by beating the New York Rangers three games to two. He was the first American born citizen to be a member of an NHL playoff championship team, having his name engraved on the Stanley Cup as a member of the champion Detroit Red Wings.

Johnny Sherf continued his professional Hockey career until 1944. He was a member of the Detroit Red Wings for his entire career but was often assigned to the top Red Wings farm team, the Pittsburgh Hornets. Sherf gained recognition both with the Red Wings as well as the Hornets. Because of his skating speed, he was often re-called to the Red Wings to participate in the annual NHL skills competitions. During his career he won the competition as the fastest skater in the NHL. He was also selected as a member of the American Hockey League all-star team representing the Pittsburgh Hornets. Sherf is still the seventh leading scorer in the history of the Pittsburgh Hornets, scoring 94 goals and 121 assists in 301 games played.

After being called for military service in 1943, Sherf returned to the Red Wings in 1944, playing in 8 games before retiring from professional Hockey.

The University of Michigan selected Sherf as a member of their Athletic Hall of Honor in 1981, only the second Michigan Hockey player so honored

John Sherf was inducted in the Calumet High School Hall of Fame in 2013.