Air Hockey requires an air-Hockey table, two player-held mallets, and a puck. A typical air Hockey table consists of a large smooth playing surface, a surrounding rail to prevent the puck and mallets from leaving the table, and slots in the rail at either end of the table that serve as goals. On the ends of the table behind and below the goals, there is usually a puck return. Additionally, tables will typically have some sort of machinery that produces a cushion of air on the play surface through tiny holes, with the purpose of reducing friction and increasing play speed. In some tables, the machinery is eschewed in favor of a slick table surface, usually plastic, in the interest of saving money in both manufacturing and maintenance costs. Note that these tables are technically not air hockey tables since no air is involved, however, they are still generally understood to be as such due to the basic similarity of gameplay.

There also exist pucks that use a battery and fan to generate their own air cushion, but as they are prone to breakage, they are commonly marketed only as toys. An air Hockey table has no friction. Currently, the only tables that are approved for play and sanctioned by the USAA (United States Air-Table-Hockey Association) for tournament play are 8-foot tables manufactured by Dynamo.

Approved tables include the Photon, Pro-Style, Best Shot, older Blue Top, Brown Top, Purple Top or Black Top with unpainted rails. The HotFlash 2 and other full-size commercial tables with neon lights and/or painted rails are not approved for USAA play but can be used to learn the game.

Three and Four-player tables also exist, but they are not sanctioned for competitive play. Air Hockey pucks are slim discs made of Lexan polycarbonate resin. Standard USAA-approved pucks are the yellow lexan, red lexan and the Dynamo green. In competitive play, a layer of thin white tape is placed on the face-up side. Air Hockey pucks come in all many shapes. The shapes could be a triangle, hexagon, octogon and even a square.

A Mallet (sometimes called a goalie, striker or paddle) consists of a simple handle attached to a flat surface that will usually lie flush with the surface of the table. The most common mallets, called "high-tops", resemble small plastic sombreros, but other mallets, "flat-tops", are used with a shorter nub.

RULES : Here are some basic rules as defined by the USAA: A face-off or coin toss decides which player gets the first possession of the puck. The first person to score 7 points by shooting the puck into the opponent's goal wins the game.

When the puck breaks the horizontal plane inside the goal, a point is counted, whether or not captured by the electronic scoring device. Once the puck is on a certain player's side of the center line, he/she has 7 seconds to hit the puck back across the center line. Otherwise a foul is committed and the opponent receives possession of the puck.

Placing one's mallet on top of the puck, known as topping, is a foul. Here the opponent receives possession of the puck. A player cannot touch or strike the puck with any part of his/her body or with any object other than the mallet. Doing so causes a foul and possession changes hands.

If the puck is on a clear path into the goal and the player stops it with anything other than the mallet, this is goaltending. Here the opponent receives a free shot. Hitting the puck when it is on the opposite side of the center line, or crossing the center line completely with one's mallet causes a foul. Here the opponent receives possession of the puck. Red lines in the air hockey should not be crossed by the air hockey mallet. (Catalan Champion Chip) If there is a red line on the goals, it means that you can not keep the air hockey mallet behind the red line. (Catalan Champion Chip).

The players playing can not touch the puck at any time during play, but if one player scores they can put the puck in loser's side. Full list of Rules CLICK HERE

Air Hockey is also available on Tablet, iPad, Smart Phone and the Lenova - IdeaCenter Horizon Table PC that works like a gigantic tablet. 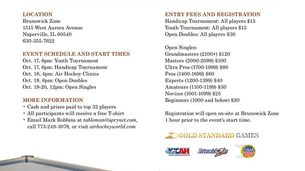 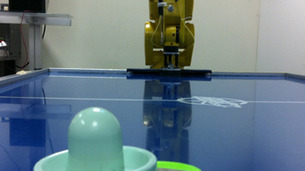 Air Hockey Robot - Bot 1000 - Outscores Humans 10 to 1 ?
Bill Wong of Electronic Design magazine talks with Michael Worry of Nuvation about the Air Hockey Bot 1000, the best air hockey player on the planet, and the engineering behind the game. ... 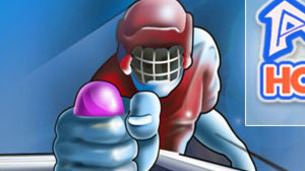 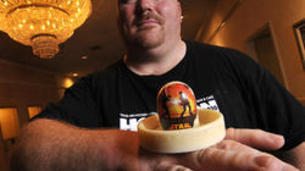 World Air Hockey Champion Danny Hynes defends International Air Hockey Title
Story by Steven Tallas; photos by Roberto Vigo A game that was once categorized as a 1970’s arcade game is now making itself known to be a world-wide adrenaline pumping sport. Approachi...

Air Hockey was invented by a group of Brunswick Billiards employees, including Bob Lemieux, from 1969 to 1972. In 1969, a trio of Brunswick engineers - Phil Crossman, Bob Kenrick, and Brad Baldwin - began working on the creation of a game utilizing a frictionless surface. The project stagnated for several years until it was revived by Lemieux, who then focused on implementing an abstracted version of ice Hockey, with a thin disk, two mallets and slit-like goals equipped with photodetectors.

It was then decided that the game might appeal to a larger market and Air Hockey was born.

Who deserves credit for the invention is controversial. The original patents reference Crossman, Kenrick and Lemieux.

It should also be noted that the air table proper had already been patented before Brunswick's project, though for unrelated purposes. In any event, the game was an immediate financial success and by the mid-1970s there arose substantial interest in tournament play. As early as 1973, players in Houston had formed the Houston Air Hockey Association, and soon thereafter, the Texas Air-Hockey Players Association, codifying rules and promoting the sport through local tournaments at Houston pubs Carnabys, Damians, and the University of Houston.

To ensure uniform play standards of the highest competitive quality, the United States Air-Table Hockey Association (USAA) was formed in 1975 by J. Phillip "Phil" Arnold, largely as an official sanctioning body. In this way, non-player friendly rules imposed by Brunswick corporation were rendered void, and the sport of Air Hockey was secured under the control of players since that time.

Since its inception, the USAA has sanctioned at least one national-level or World championship each year, crowning 12 different champions over 30 years.

The USAA remains at present the only recognized worldwide player organization for Air Hockey, and has maintained a close relationship with table manufacturers and event promoters over the years.

Today, professional Air Hockey is played by a close-knit community of serious players around the world, with extensive player bases near Houston, San Francisco, Sacramento, Los Angeles, Denver, Chicago, New York City, and Boston in the United States of America, Barcelona in Spain, Saint Petersburg, Moscow, and Novgorod in Russia, and Most and Brno in the Czech Republic. From the late 1980s, Caracas, Venezuela served as a hotbed of activity; three-time World Champion Jose Mora, and other finalists originated from there. By 1999 most of the Venezuelan activity had disappeared