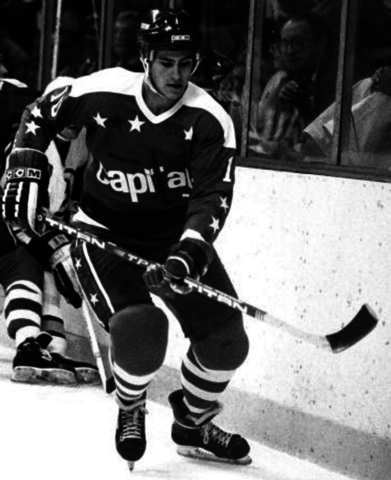 Carpenter was featured in a February 23, 1981 issue and cover story of Sports Illustrated magazine that chronicled his potential, and was labeled the "Can't-Miss Kid". He was the first U.S. born Hockey player to be featured on the cover of SI.

Carpenter was the first American player to be selected within the top five picks of an NHL draft and highest U.S.-born draft pick in history at the time he was selected (record since broken).

Carpenter was selected third overall in the 1981 NHL Entry Draft by the Washington Capitals.

Carpenter became first player to go directly from a U.S. high school team into the NHL when he made his debut on Oct. 7, 1981. ... Had goal and assist in his first NHL game. The assist, on Washington's first goal of the 1981-82 season, came just 12 seconds into the first period as Carpenter set up Ryan Walter for a breakaway. The goal beat Buffalo netminder Don Edwards at 3:06 of the second period, giving Washington a 2-1 lead in what would end as a 5-3 Capitals loss.

Carpenter became first American player to score 50 goals in an NHL season when he achieved feat in 1984-85. He broke Joe Mullen's previous American record of 41 goals when he scored his 42nd goal during Washington's Feb. 13, 1985, at Winnipeg, and he set the NHL single-season record (since broken) for goals by a U.S.-born player with 53 in 1984-85.

Carpenter was invited to play in the 1985 NHL All-Star game and he also participated in the 1984 and 1987 Canada Cup tournaments as a member of Team USA.

Primarily due to his clashes with head coach Bryan Murray, the Capitals traded Carpenter to the New York Rangers in the deal that sent Mike Ridley and Kelly Miller to Washington during the middle of the 1986–87 NHL season. Later in the season, he would be dealt again, to the Los Angeles Kings in the trade that sent Marcel Dionne to the Rangers. He finished the 1986–87 season with the United States team at the 1987 Ice Hockey World Championship tournament in Moscow after the Kings were eliminated in the first round of the 1987 Stanley Cup playoffs. Carpenter represented the United States National Team for the final time in the 1987 Canada Cup.

Carpenter was traded to the Boston Bruins during the 1988–89 NHL season, and a year later he would help guide the Bruins to the NHL Stanley Cup Finals. By this stage of his career, Carpenter was contributing more as a defensive-minded center than the high-scoring superstar whom he was once projected to be.

Carpenter signed a one-year, $500,000 contract with Washington as unrestricted free-agent on June 30, 1992. The deal included two option years, which Washington would have to exercise after the first season. Washington chose not to exercise this option, making Carpenter a free agent again after the 1992-93 season.

Carpenter attended New Jersey's 1993 training camp on a tryout basis on Sept. 13, 1993. He earned a spot on roster and signed a two-year contract on Sept. 30, 1993, and then would play there for the final six seasons of his NHL career. It was during his time with the Devils that he would help the team win their first Stanley Cup in the lockout-shortened 1994–95 NHL season. After retirement, Bobby Carpenter stayed on as an assistant coach, winning two more cups with New Jersey in 2000 and 2003.