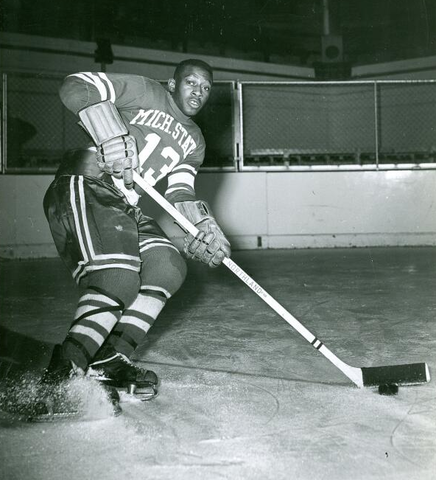 Born in Montreal's working-class Saint-Henri, then Montreal's black district, today called "Little Burgundy." He was the fourth of six children - brother Robert and twins Frederick and Reginald came before him, sisters Louise and Gwen after - born to James Levi Theophilus Lord, a Barbadian immigrant to Canada, and Susan Kathleen Lord (née Daley), who hailed from Montserrat.

By the time Lord reached adolescence, he was delivering newspapers and groceries and shovelling snow to earn money. But he had also discovered a passion for sport, including Hockey. He saw, though, that kids in his neighbourhood - some of whom had dropped out of school - did not enjoy the same access to the game as those who lived in wealthier parts of Westmount.

With that in mind, while he was in his early teens, he founded the Tornadoes Boys Club, an organization that fielded both Hockey and baseball teams. In addition to coaching the boys, Mr. Lord served as a mentor to them.

Lord attended St. Leo's school in Lower Westmount and was a star on the Hockey rink and football field.

Hockey also allowed Mr. Lord to attend university. After graduating from Westmount High School, was accepted by McGill University, but once they saw he was black they refused him.

Lord was determined to become an engineer so he contacted the University of Michigan, hoping that his Hockey skills would get him a scholarship. When he arrived at the university and they saw he was black, they also wanted to get rid of him. However, faced with his perseverance, they granted him a $5,000 scholarship … subject to the condition that he would have to return it if he didn't get the Hockey team to win (he studied chemical engineering with the support of the sports scholarship).

Lord turned heads almost immediately upon arrival. It wasn't that the folks in East Lansing weren't used to seeing African-Americans at the University or on its teams. It was Lord's sport of choice that came as a surprise.

Eventually, the matter was resolved, and Lord's college career was underway. However, the large number of young men going back to school after World War II produced a housing crunch, and there was no dorm space available for Lord, forcing him into other accommodations.

"I lived on a bunk," Lord recalled. "It was one big hall for about 16-20 people, and everybody had a nook with a bunk, upper and lower.

Then, there was the hockey. Former Minnesota All-American Harold Paulson took the reins of Michigan State's first varsity team since 1930. If anyone doubted that Lord was a hockey player, it didn't take him long to set those doubts aside.

"We had an intra-squad game, the varsity playing against the freshmen" Lord said. "We played that game, and we beat them 2-1, and I scored two goals, and that kind of settled that for a while."

Settled though it might have been that Lord was a talented player, freshmen were still ineligible for varsity competition. So Lord went through his classes, played with the freshman team, and sold programs at Spartan football games. He made friends, and generally settled in to life in East Lansing, which - as one might expect in the early 50's - occasionally presented challenges.

"I got into a dormitory," Lord said, "and the first time I went into the dormitory, I caused another problem, because I was roomed with a fellow with red hair who came from Manitoba. I checked into the dormitory, and they called me because we were the first time they had a black and white roommate together. They said, `Mr. Lord, do you know that the guy that you're moving in with is white?' I said, `Yeah. So?' And they called him and they asked him, and he said, `Yeah, so?'"

While the two Canadians coexisted without a problem, they decided to change their arrangement after a month. "I said, `OK, let's not put any more pressure,'" Lord said.

Lord moved in with Lawrence Perry, another black student from Ypsilanti, Mich. Lord and his original roommate remained friendly, though, through the "Canadian Club," an informal association of Canadian students - organized by Lord - who gathered every so often. "We'd just chit-chat," Lord said. "Play some touch football with the girls and the guys and so forth."

After a year, as Lord said, "They got adjusted to Richard Lord." As Lord returned for his sophomore year, it was time for his varsity hockey career to begin. While there was no doubting Lord's talent after that day in the freshman-varsity game, there was still some discomfort among some of the other Spartans. "Most of the members were okay," Lord said, "but one or two were a little disturbed I was on the team. They didn't think, as a black person, I should be on the team."

Lord was on the team, though, and it was a good thing. After going 0-14-0 the year before, the Spartans went 6-11-0 in Lord's first year on the ice. Lord scored 17 points on eight goals and nine assists, ranking second on the team, which is even more impressive when one realizes that he didn't play in all 17 games. "They heard I came from McGill," Lord said, "and they didn't permit me to play a game, so I said, `I didn't go to McGill. I came from Westmount High.'"

The confusion stemmed from differences between the American and Canadian education systems. "I was hitting too high marks in certain courses," Lord said, "Introduction to Trigonometry and Intro to Analytical Geometry and Calculus. At Westmount High, they gave you that in your last year, so I was introduced to trigonometry at Westmount High. At Westmount High, if you didn't have big money to go to university right away, they would have a little extra class there, especially if you were going into engineering or medicine. I took them, but it was all high school."

Once again, the matter was eventually resolved, and Lord went on being a student-athlete, which was often more challenging because of his race.

"I got quite a few penalties," Lord said, "because everyone was going after me. I didn't retaliate; I just gave the guy a good bodycheck, and the whistle would go. I had a little friction in North Dakota. On the ice, the guys would try to call me names, but they didn't provoke me. Occasionally, you had a few names, like `N----- n-----, come to dinner, half past two, fried potatoes, alligators, all for you,' but that was nothing. We just laughed at that."

Lord led the Spartans in penalties in each of his three seasons, and the friction hardly ended when he stepped off the ice. However, his Spartan teammates looked after him.

"When we moved into the hotels, when we went to North Dakota or someplace like that, I noticed that all the players had their rooms, and I was sitting in the lobby waiting as the coach negotiated with the hotel," Lord said. "Usually, what happened was one of the players would come down and say, `Oh, Richard, come with me,' and I'd go up to his room and stay with him. The coach was discussing the room, but a guy already had a room and he asked me to come with him, so they couldn't do anything about it."

Lord finished his Spartan career with 18 goals and 17 assists playing in 20 games in three seasons.

Lord was one of the first black people to play varsity Hockey in the United States.

After completing his degree in chemical engineering in 1953 and making his way home to Montreal, he struggled to find a job. Each morning, though, he would dress for work and head to an office that belonged to a friend. He would then spend the day sending out his curriculum vitae.

Finally, in 1954, he landed his first position, as a chemist with Dominion Tar and Chemical Ltd. After a year, he went on to serve as an engineer with the City of Montreal's public works department, which led to him taking on an engineering role at Expo 67.

The job allowed Mr. Lord to build a vast network of contacts. At the same time, his political life, including a stint as the English-speaking vice-president of the Quebec Liberal Party, widened his professional reach. And though he lost his bid in 1965 to represent the federal Liberals in the Notre-Dame-de-Grâce riding to Mr. Allmand - who served in Parliament from 1965 to 1997 - he remained involved with the party in the years that followed.

In the late 1960s, Mr. Lord became a research consultant and community liaison officer with the Special Senate Committee on Poverty; later, he was appointed to the Immigration Appeal Board of Canada.

"That's where his eyes had been opened up to the assistance that people might need in presenting their cases" to live in Canada, Ms. Carol Spence said (2nd wife).

He went on to establish companies including Canafric Development Corp. - a firm that promoted Canadian engineering in Africa - and Richard Lord International Immigration Consultants Inc. In 1994, he was named an adjudicator on the Immigration and Refugee Board of Canada, a position he held until 1996.

After he retired, Mr. Lord remained active at St. George's Anglican Church - where he was a member throughout his life - and the many organizations he was part of; among them were Montreal's Maison Cross Roads, the Canadian Bible Society of Montreal, the Royal Commonwealth Society and the Westmount High School Alumni Association. He attended his alma mater's graduation and Remembrance Day ceremonies each year.

NOTE
Lord was known to be the first black person to play varsity Hockey in the United States. Other reports claim Lloyd St. J. Robinson played for Boston University starting in 1947.