Underwater Ice Hockey - Sub-Aqua Ice Hockey is a minor extreme sport that is a variant of ice Hockey. It is played upside-down underneath frozen pools or ponds. Participants wear wetsuits, masks and flippers, and use the underside of the frozen surface as the playing area for a floating 10 inch styrofoam puck that they try to score into nets fastened to the ice cover upside down. Underwater ice Hockey players need to have excellent breath-holding abilities, the players are apnea divers, also known as free divers or breath hold divers. They are not allowed to play with any kind of breathing apparatus. Considering matches can get pretty physical, players need to surface about every 30 seconds, for a breath of fresh air. Because divers can easily get disoriented during a game, in case one of them is to exhausted to reach the hole, or can’t find it, four divers equipped with oxygen tanks supervise every match. Underwater ice Hockey periods last 10 minutes, and players are allowed 10 minute breaks to warm up. 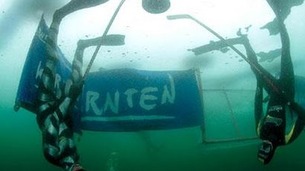 UNDERWATER ICE HOCKEY
Underwater Ice Hockey is a new sport that originated in Austria and is increasingly popular among freedivers and extreme sports enthusiasts. Not to be confused with underwater hockey, which ...

The first underwater Ice Hockey world cup was held at the lake of Weissensee in southern Austria in February 2007 and competed under 30cm of ice in 2°C water in a rink six metres wide and eight metres long. Finland finished first, followed by Austria and Slovakia. The other playing nations were Czech Republic, Germany, the Netherlands, Poland and Slovenia. The final score in the championship game was Finland 7 to Austria 4.