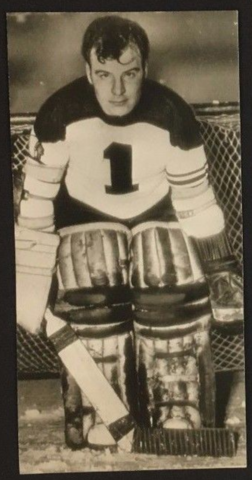 LoPresti had never worn a pair of ice skates until the ninth grade. However, inspired by local players Frank Brimsek and Mike Karakas, he took up the position of goaltender and was his high school Hockey team's starter by his final year of high school. He played for local junior colleges where he was scouted by the American Hockey Association /AHA's St. Paul Saints.

In his first season with the Saints, 1937–38, LoPresti appeared in 48 games, posting a 10–38–2 win-loss-tie record and a 3.62 goals against average (GAA). He improved to 23–21–2 the following season. In his third season in St. Paul, LoPresti was named to the league's second all-star team after recording 29 wins and 4 shutouts. The Saints won the 1940 American Hockey Association / AHA championship and the Harry F. Sinclair Trophy, defeating the Omaha Knights in four games, LoPresti posted a 6–1 record and 1.29 GAA during the playoffs.

During that season, he was discovered by Bill Tobin and Paul Thompson, president and coach of the NHL's Chicago Black Hawks, during an exhibition game between the two teams. He was signed by Chicago, and began the season with the AHA's Kansas City Americans. LoPresti was recalled to Chicago when goaltender Paul Goodman retired. He made his NHL debut on January 5, 1941, and went unbeaten in his first four starts. He appeared in 27 games with Chicago, finishing with a record of 9–15–3.

LoPresti made NHL history on March 4 in a game against the Boston Bruins. He faced a league record 83 shots in a regulation, 60 minute game. It took Boston 42 shots to beat LoPresti for their first goal, (36 pucks in the first period alone, followed by 26 shots in the second and 21 in the third) and kept the Black Hawks close in what was ultimately a 3–2 Boston victory.
"They were shooting from every angle and I didn't see half the shots. They were bouncing off my pads, chest protector, my arms, my shoulders. I didn't even know where they were coming from. I lost between eight to 10 pounds that night" — LoPresti describes his 80-save performance against the Boston Bruins.

As Chicago's top goaltender in the 1941–42 NHL season, LoPresti won 21 games against 23 losses. He was his team's star in the Black Hawks' 1942 Stanley Cup playoff series against the Bruins. He recorded one playoff shutout to go with three in the regular season, but Chicago was eliminated by Boston.

LoPresti left the NHL during the Second World War to join the United States Navy where he served on board the SS Roger B. Taney as a gunner's mate, assigned to duty protecting ships as they crossed the Atlantic Ocean. The ship was torpedoed and sunk during an Atlantic crossing in February 1943. Listed as missing in action, LoPresti was thought to be the first casualty among American professional athletes in the conflict. As the Roger B. Taney sank, LoPresti and the other Naval Armed Guards abandoned the ship on rafts, which were picked up the next morning by the lifeboats. He was one of 26 men who took refuge in the number 4 lifeboat with minimal water or food supplies. The lifeboat was sailed to the South American coast in a voyage of 42 days, traveling nearly 2,500 miles (4,000 km) southwest, before they were found and rescued off the coast of Brazil. They had collected rain water when they could, at times drinking only 4 imperial fluid ounces (110 mL) per day and had only a small amount of biscuits and bakers chocolate for food. LoPresti was credited with saving the men's lives by catching the only real food they had during their entire ordeal after noticing dolphins swimming around their boat on one occasion. According to another sailor, LoPresti improvised a weapon by lashing a sheath knife to a boat hook. He plunged into the ocean, catching a 35-pound (16 kg) dolphin. They hauled it into the boat, drank its blood, and cooked the meat in a metal bucket with rags and kerosene.

LoPresti returned to Hockey following his ordeal, but never played in the NHL again. He played two seasons in California with the San Diego Skyhawks before returning to his Minnesota home to play several seasons of senior Hockey in Duluth and Eveleth. He was named the most valuable player of the North America Hockey League in 1949–50 as a member of the Eveleth Rangers, and retired from Hockey in 1951.

Sam LoPresti was a charter member of the United States Hockey Hall of Fame, inducted in 1973