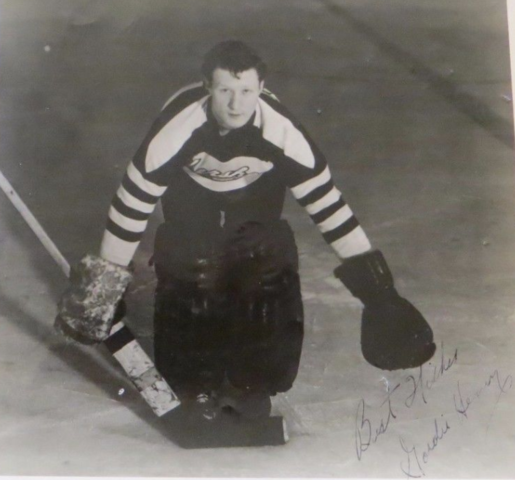 Henry rose up through the local minor Hockey system and eventually signed with the Philadelphia Falcons of the Eastern League. He excelled in 28 games as a rookie in 1943-44 and earned a place on the league's second all-star team.

By the late 40's Henry was the first string backstopper for the Hershey Bears. He led the team to the 1947 Calder Cup championship and topped all goalies with eight playoff wins, allowing just one goal in the final three games of the Calder Cup Finals against the Pittsburgh Hornets.

Henry got the call to play for the Boston Bruins in 1948, and recorded a shutout in his first NHL game for the Bruins. Henry also played for them in 5 games during the 1952 and 1953 Stanley Cup playoffs, when the league consisted of just six teams and featured but one goalie per team.

After spending a year with the senior Owen Sound Mercurys in 1955-56, Henry played one game for the EHL's Philadelphia Ramblers the next season before retiring.

Gordon "Red" Henry was inducted into the Hershey Bears Hockey Club Hall of Fame in 2013.