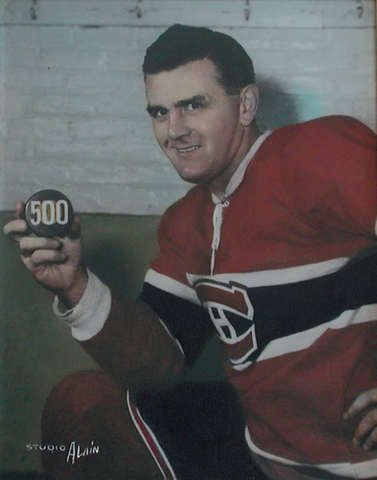 Maurice Rocket Richard with his 500 Goal Puck scored on October 19, 1957 vs the Chicago Black Hawks at Montreal Forum.

Richard was the first player in NHL history to score 50 goals in one season, accomplishing the feat in 50 games in 1944–45.

Richard would end his illustrious career having scored 544 goals, becoming the first player to break the 500-goal plateau. He won eight Stanley Cups, seven as a player and one in 1965 as Assistant to the President of the Canadiens, one Hart Trophy in 1947, and was an NHL All-Star each season from 1947 until 1959. He led the NHL in goals five separate times during his career.

Richard was inducted into the Hockey Hall of Fame in 1961, having the customary three-year waiting period waived in his honour. In 1967, he was inducted as an Officer in the Order of Canada. 1992 saw him appointed to the Queen's Privy Council for Canada, ensuring that he would be referred to as "The Honourable" for life. In 1998, he was made Companion in the Order of Canada. This last honour is normally reserved for members of Cabinet, Chief Justices of Canada, and other dignitaries who require access to classified documents. His recommendation came directly from Prime Minister Brian Mulroney.