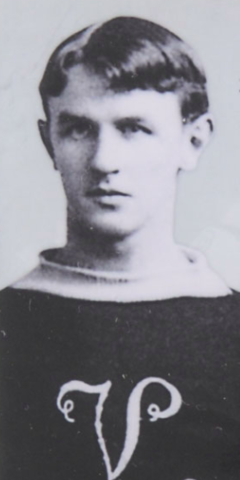 Bowie grew up in Montreal, which was the Hot-Bed of ice Hockey in the early days of the sport. He first learned to play at Tucker School. As a 12 year old, Bowie played in the Quebec Amateur Hockey Association / QAHL for the Montreal St. John's in 1892-93. He then played for 2 teams over the next 3 seasons, the QAHA Montreal Tuckers and also played junior Hockey with the Montreal Comets in the Montreal City Junior Hockey League / MCJHL.

Bowie was noticed by the Victoria Hockey Club as a teenager playing in the MCJHL who had strong skating skills and could shoot a Hockey puck very well.

The Victoria Hockey Club had it's own rink, the Victoria Skating Rink in Montreal, and Bowie would become whats known today as a rink rat. First joining the club for the 1896-97 season, Bowie had witnessed the senior men of the club, the Montreal Victorias successfully defend the Stanley Cup championship on December 27, 1897 vs the Ottawa Capitals at the Victoria Rink.

Bowie would represent the Montreal Junior Victorias, leading the team to the Montreal City Junior Hockey championship in both 1896 and 1897.

Bowie played the position of "Rover" which was basically a forward that could go wherever the play dictated. The rover was also a 7th player on the ice.

Prior to the start of the 1898–99 season, the Amateur Hockey Association of Canada / AHAC dissolved. The defending Cup champion Montreal Victorias along with several other former AHAC members formed the Canadian Amateur Hockey League / CAHL, a league Bowie was soon to dominate.

Bowie finished the season in 3rd place for league scoring with his 11 goals. There were no recording of assists during that era of Hockey, so it was the goal scorers that got noticed.

On February 20, 1901, Bowie of the Montreal Victorias scored seven goals in a game vs the Montreal Hockey Club, and two weeks later (March 2), he scored 6 goals against the Quebec Hockey Club. He finished the season with 24 goals, 14 more than his nearest rival. Over his career, Bowie would average almost three goals per game, a mark only matched by Frank McGee in major senior play. He again led the league in scoring in 1903, with 22 goals in 7 games, 8 ahead of McGee.

Bowie was named captain of the Montreal Victorias for the start of the 1902-03 season, and he helped the team to a 1st place tie in the 1903 CAHL with the Ottawa Senators. Both teams would play in a 2 game series for the Stanley Cup championship - Ottawa won.

Bowie was entering his prime as a goal scorer, unfortunately the Montreal Victorias were not one of the stronger teams in the CAHL. Bowie was regarded highly in the CAHL by players, executives and the newspapers.

An accomplished stickhandler who credited his skill to employing an unusually short stick, he was cited in many all-star lists as one of the very best forwards of Hockey's first half-century.

The 1905 CAHL season was the seventh and final season of the league. The CAHL had a lot of scoring. The league leader, Russell Bowie of the Victorias scored 27 goals in eight games

Bowie does not win games with his skates. His head and hands have brought him the reputation he holds as the most effective scoring player in the game…Bowie, in the minds of the rooted who have followed the game for year, is the trickiest Hockey player that ever stepped on the ice.

The Victorias won the 1905 season with a record of 9–1, but could not make a satisfactory arrangement with the Stanley Cup trustees and would not play in a challenge against Ottawa. The Victorias were granted a best-of-three series by the trustees, but declined, demanding a sudden-death game or two-game, total-goals series, which was not agreed to by the trustees.

Bowie is listed in what is believed to be the first all-star team ever selected in major Hockey in 1905.

The 1906 season was the inaugural season of the Eastern Canada Amateur Hockey Association / ECAHA. Six teams played a 10-game schedule, with the Victorias finishing in 3rd.

Bowie never accepted money to play Hockey, famously refusing all importuning and turning down large offers, and was quoted as saying, "I am an amateur, was an amateur, and will die an amateur." He weathered a scandal in 1907 where it was alleged that he had taken pay from the professional Montreal Wanderers club, but the allegations were proven baseless - although the Wanderers did send him a grand piano in anticipation of Bowie's acceptance of their offer, an inducement he refused to receive.

Bowie did play against professionals in the ECAHA and IPAHL, as many teams were now paying players.

In November 1908, the Montreal Victorias resigned from the ECAHA and proposed to set up a new amateur ice Hockey league, the Interprovincial Amateur Hockey Union / IPAHU. Unpaid players would no longer play with paid players.

Bowie played in ten games for the Victorias in the next two seasons in the lower level amateur competition ( IPAHU), and his club spearheaded a new Hockey trophy for amateurs, as Sir H. Montagu Allan gave the new "Allan Cup" to the Victoria Hockey Club of Montreal to give to the 1909 champion of their league, the Inter-Provincial Amateur Hockey Union / IPAHU. The Ottawa Cliffsides won the IPAHU championship, surpassing the Montreal Victorias with a 5-1-0 record (Montreal was 4-2-0) to win the league title and be awarded the Allan Cup on March 6, 1909.

Bowie's retirement was punctuated by an injury in 1910, when he broke his collarbone. The professional National Hockey Association / NHA also formed in 1910 and Bowie never played again except in exhibition matches.

Bowie then turned to refereeing games in the new NHA.

On the night of January 27, 1916, a “patriotic benefit” game was held for the 148th Overseas Battalion, one of the Canadian Expeditionary Force’s newest infantry battalions, pitting veterans of the famous Ottawa Silver Seven against a team of former Montreal greats. The teams had previously played in Ottawa, drawing 3-3 a few nights earlier. Montreal older-timers included, Russell Bowie, Dickie Boon, Ernie Russell, and goaltender Riley Hern. Ottawa’s line-up of retired greats featured Bouse Hutton, Harvey Pulford, Alf Smith, and Rat Westwick. Powered by Bowie’s four goals, Montreal prevailed by a score of 6-2. The seven-a-side exhibition raised $1,500 on the night, which was divided between the 148th and another incipient battalion, the 150th.

Newspaper and Magazine Quotes about Bowie after he retired.

I see Russell Bowie is up to his old tricks of making the goal-keeper look like a wooden Indian in front of a cigar store. There was one great player who could have filled in his own figures to the N.H.A. contract if he wanted to participate in the pro league. To my mind he was the greatest player that ever lived. He was fast and brainy. His stick was a magnet to the puck and he walked right in on the defence before he ever thought of shooting. He worried every goal-keeper whether he had the puck or not and gave punishment, never got any and sent hundreds of players to the side by faking an injury. He had a great trick of playing the rubber to the boards and if his check blocked the puck, he would clap his hand to his head or side and drop to one knee. The referee would instantly stop the game and under the impression Bowie had been shortended, chase the other fellow to the penalty box. Aside from his tricks, he had the goods.​

Bowie was picked for the number 2 team at centre. There were 3 teams picked, which included just 3 amateurs and the rest professionals, stating how good Bowie was. No amateurs were on the 1st team.

The slight, almost frail rover of the Victorias played during what was probably the roughest era of Hockey for he was a starred member of Victorias when the Silver Seven was in its heyday. It took more than ability to score goals to get by against such stalwarts as McGee, Pulford and the Smiths but even in this company, Bowie, over a period of ten years, was the leading scorer in the Eastern Canada Hockey Association. Bowie was probably the shiftiest player that ever carried a puck. He could nurse the disc between his skates and swing through the opposition, avoiding checks, with a deftness that beggars description. He was probably also one of the smartest players who ever handled a stick. And, though he was a marked man in every game he played, he led the E.C.H.A in scoring in practically every season from 1900 to 1909. When the National Hockey Association was formed, the amateur Vics dropped from competition and Bowie never played again except in exhibition matches.

The Trail of the Stanley Cup, author Charles Coleman selected Bowie along with Joe Malone and Frank Nighbor as the best forwards in all of Hockey from 1893 through to 1926.

Russell "Dubbie" Bowie was inducted into the Hockey Hall of Fame in 1947.

Hockey writers and historians have quoted Bowie as being the 1st superstar in the games history.