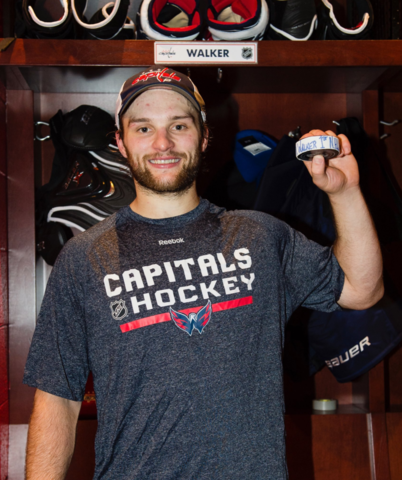 The 23-year-old forward became the first ever Australian ice Hockey player to play in the NHL after debuting with the Washington Capitals on October 7, 2017, wearing number 79, came off the bench in the second minute of the game, and then scoring a second-period goal by deflecting Devante Smith-Pelly's shot past Montreal Canadiens goalie Al Montoya with 1:55 remaining in the period.

Walker was also the first Australian player drafted in the NHL, when he was selected in the third round by the Washington Capitals in 2014.

"I'm at a loss for words," Walker said. "That's incredible. A really special moment, a proud moment." and "I'm just happy to be out there playing Hockey, especially with these guys out here, it's a dream come true," he said.

Walker's family were in the USA to watch the game, bringing an Australian flag to hold in the stands of the Verizon Centre in Washington, DC.

The very next night, Malcolm Turnbull, the Prime Minister of Australia, gave Walker a call to congratulate him on his accomplishment. The call turned into a three minute interview.
The best part was when Turnbull asked Walker about his first career goal.
“Yeah,” Walker said. “I used my butt to get it in.”

Walker was born in Cardiff, Wales, but moved with his family to Sydney when he was two years old.

After being introduced to the sport by his brother, Ryan, Walker moved on his own to the Czech Republic at age 13 to play minor and then junior Hockey, after being limited by the opportunities in Australia. In the Czech Republic, Walker was also the first Australian ice Hockey player to play for a professional senior team in Europe.