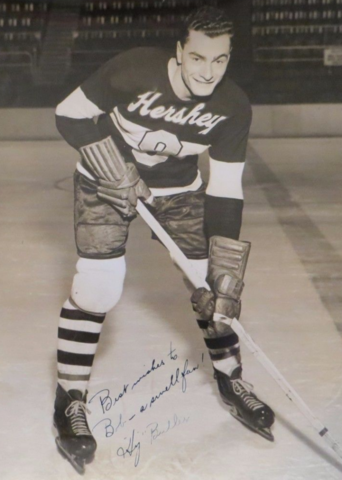 Known as the "The Blueline Blaster" because of his penchant for hitting opposing players above the skate toe and below the pads.

Buller played junior with the Saskatoon Jr Quakers then turned pro with the Eastern Amateur Hockey League's New York Rovers in 1942-43. Buller was outstanding and named to the league's second all-star team.

Buller played 7 games for the Detroit Red Wings during World War II but spent most of the season with the Indianapolis Capitols.

Buller signed with the AHL Hershey Bears in 1944, and with him in the lineup they were runners-up for the pennant twice. Buller then helped the Bears win the 1947 Calder Cup championship.

Buller was traded to the AHL Cleveland Barons by Hershey for Babe Pratt and Joe Cooper, December 24, 1947, and helped them set a league record of thirty undefeated games.

Buller helped the Barons to Calder Cup championships in 1948 and 1951. Buller was named to the American Hockey League’s (AHL) First All-Star Team in 1949 and 1951, Buller at that time held the record for most all-time points scored by a defenseman.

In May, 1951 Buller was traded to the New York Rangers, and after much deliberation moved his young family to the city. In his first year Buller played defense alongside Allan Stanley and his performance matched the Rangers’ record for a defenseman. He won the West Side Association of Commerce Trophy as the Rangers’ most valuable player and came in second for the Calder Trophy; he was also the first rookie defenseman to be chosen for the Rangers’ All-Star second team. He was outstanding in his first big league season, scoring 35 points, delivering a host of thunderous hits. Buller was also picked to play in the 1952 NHL All-star game.

Buller’s connection to the large Jewish population in New York was used by the Rangers’ management to attract a new audience to the home games. Banners emblazoned with the Star of David were hung from Madison Square Garden and his faith was frequently reinforced by sports writers.

Buller played for the Rangers until the 1953-54 season, then suited up with the WHL's Saskatoon Quakers to finish the season before retiring in 1954.

The Buller Family returned to Cleveland for a few years where Hy worked as a salesman before moving to Vancouver, British Columbia in 1962 where he coached several amateur Hockey teams.

Hy Buller was inducted into the Greater Cleveland Sports Hall of Fame in 1977.