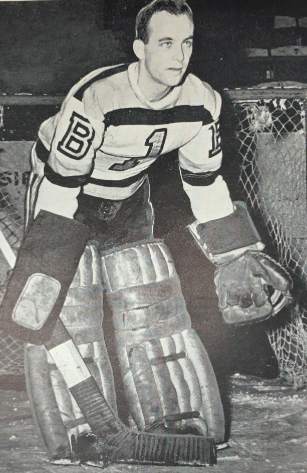 Bibeault made 38 appearances for the Canadiens the next year, while also playing in 13 games for the AHL Washington Lions. Bibeault played in all 50 games on the 1942-43 schedule for the Canadiens, leading the NHL in games played. By December 1943, it became apparent that Bill Durnan would be the Canadiens’ netminder for the foreseeable future and Bibeault was loaned to the Toronto Maple Leafs for the balance of the season. In so doing he became the third goalie after George Hainsworth and Lorne Chabot to play for both the Maple Leafs and the Canadiens.

Bibeault excelled for the Maple Leafs with five shutouts and earned selection to the NHL second all-star team in 1944.

Bibeault was again loaned, this time to the Boston Bruins by Montreal as a war-time replacement for Frank Brimsek, December 27, 1944, and played in 38 games for Boston to close out the year and 16 games in the early going the following season. An injury to Durnan resulted in a recall to Montreal and Bibeault once again took his place in the Canadiens net, replacing Durnan for 10 games.

Bibeault was traded to the Chicago Black Hawks by Montreal for George Allen with both teams holding right of recall, September 23, 1946. He played his final 41 NHL games with the Black Hawks and at seasons end the trade was reversed, with both players involved returning to their original teams.

Bibeault spent the remainder of his career in the minors - Fort Worth Rangers 1941, Buffalo Bisons 1947-48, and his finest season came in 1948-49 when he starred for the USHL's Dallas Texans. Bibeault was placed on the league's first all-star team, won the Charles Gardiner Memorial Trophy as the top goalie in the USHL, and was presented the Herman W. Paterson Cup as the league MVP.

Bibeault finished his pro career with the Cincinnati Mohawks, playing from 1950 to 1954.

Bibeault is one of two NHL players who wore the number 0, the other was Neil Sheehy. Bibeault was given #0 in one of the games for the Montreal Canadiens in the 1940-31 season, and he was recorded as the first player in the NHL to have worn the number. He also had worn #1 and #16 in games, so it's not like #0 was his designated number, but he was the first.