Floorball, a type of floor Hockey, is an indoor team sport which was developed in the 1970s in Sweden. Floorball is most popular in areas where the sport has developed the longest, such as the Czech Republic, Denmark, Estonia, Finland, Latvia, Norway, Sweden and Switzerland. The game is played indoors on a wooden or rubber mat floor or just a basketball court, making it a year-round sport at amateur and professional levels. There are professional leagues, such as Finland's Salibandyliiga and Sweden's Svenska Superligan. While there are 55 members of the International Floorball Federation (IFF), the Czech Republic, Finland, Sweden and Switzerland have finished in most of the coveted 1st, 2nd and 3rd places at the World Floorball Championships.

In addition to those four countries, floorball is gaining popularity in countries such as Latvia, Australia, Canada, Germany, Japan, Singapore, Malaysia and the United States.

The world floorball championships are an annual event where teams from across the world gather to play in a tournament in order to win the world championship. As of 2011, eight Men's, eight Women's, six Men's Under-19, and four Women's Under-19 World Floorball Championships have taken place. The Czech Republic, Finland, Norway, Sweden and Switzerland remain the only five countries to have ever captured a medal at a World Championship event.

The Men's World Floorball Championships take place every December (since 2008) in every even year.

The Women's World Floorball Championships take place every December (since 2009) in every odd year.

The Men's under-19 World Floorball Championships take place every May (since 2009) in every odd year.

The Women's under-19 World Floorball Championships take place every May (since 2008) in every even year.

From 1996 to 2009, the IFF used a World Floorball Championship format where the last team in the A-Division was relegated to the B-Division, while the top team in the B-Division was promoted to the A-Division. This format caused much hardship for countries such as Australia, Canada, Slovakia, and Spain, who have all been trying to get to the B-Division from the C-Division since 2004. In 2010, the IFF adopted a FIFA-like continental qualification system, where teams must qualify to play at the world championships. Depending on the number of countries registered per continent or region, the IFF gives spots for the world championships. For example, Argentina, Brazil, Canada and the United States would need to play for one spot at the world championships in a continental qualification tournament for the Americas. Floorball is played indoors on a rink whose size can officially vary from 18–22 meters wide to 36–44 meters long. The rink is surrounded by 50 cm high enclosed boards with rounded corners. The goals are 160 cm wide and 115 cm high. Their depth is 65 cm and they are 2.85 meters from the end of the nearest boards.

Typical equipment for a floorball player consists of a stick, a pair of shorts, a shirt, socks, and indoor sport shoes. In addition to that, players are allowed to wear shin guards, eye protectors and protective padding for vital areas, although most don't. Protective eyewear is in some countries compulsory for junior players. A floorball stick is short compared with ice hockey; the maximum size for a stick is 114 cm. As a stick cannot weigh any more than 350 grams, floorball manufacturers produce sticks that are often made of carbon and composite materials.

A floor ball weighs 23 grams and its diameter is 72 mm. It has 26 holes in it; each of which are 10 mm in diameter. Many of these balls now are made with aerodynamic technology, where the ball has over a thousand small dimples in it that reduce air resistance. There have been several times where a ball has been recorded to have traveled at a speed of approximately 200 km/h

​Each team can field six players at a time on the court, one player being a goalkeeper. But the coach can take the goalkeeper off for a short amount of time, and switch him with a field player. This can make advantages for the attacking side of the team, and disadvantages when it comes to their own defence. The team is also allowed to change players any time in the game, usually they change the whole team. Individual substitution happens sometimes, but it usually happens when a player is exhausted or is hurt.

A floorball game is officially played over three periods lasting 20 minutes each (15 minutes for juniors). The time is stopped in the case of penalties, goals, time-outs and any situation where the ball is not considered to be in play. An intermission of 10 minutes takes place between each period, where teams change ends and substitution areas. Each team is allowed one timeout of 30 seconds (which is often used late in matches). There are two referees to oversee the game, each with equal authority.

Checking is disallowed in floorball. Controlled shoulder-to-shoulder contact is allowed, but ice hockey-like checking is forbidden. Pushing players without the ball or competing for a loose ball is also disallowed, and many of these infractions lead to two minute penalties. The best comparison in terms of legal physical contact is football, where checking is used to improve one's positioning in relation to the ball rather than to remove an opposing player from the play. In addition to checking, players cannot lift another opponents stick or perform any stick infractions in order to get to the ball. As well, players may not raise their stick or play the ball above their knee level, and a stick cannot be placed in between a player's legs (to avoid tripping).

When a player commits a foul, or when the ball is deemed unplayable, play is resumed from a free-hit or a face-off. A free hit involves a player from one team to start play from the place where the ball was last deemed unplayable. A comparison of this is a free kick in soccer. For many fouls, such as stick infractions, a free hit is the only discipline provided. However, at the referee's discretion, a penalty may be worth either two or five minutes. At that point, the player who committed the foul sits in the penalty area, and his team is short handed for the time of the penalty. If an 'extreme' foul is committed, such as physical contact or unsportsmanlike behavior, a player may receive a 10 minute penalty or even a match misconduct. 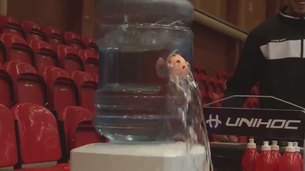 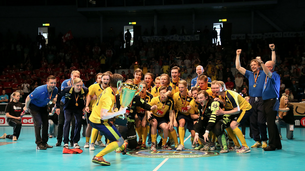 Floorball was originally played like Cosom or Floor Hockey. This image is from 1964, showing a complete kit for twelve players.

The modern game was invented in early 1970s in Gothenburg, Sweden.

The sport began as something that was played for fun as a pastime at schools. After a decade or so, floorball began showing up in Nordic countries where the former schoolyard pastime was becoming a developed sport.

Formal rules soon were developed, and clubs began to form. After some time, several countries developed national associations, and the IFF was founded in 1986.

The game of floorball is also known by many other names, such as salibandy (in Finland), innebandy (in Sweden and Norway), and unihockey (in Switzerland and Germany). The names "salibandy" and "innebandy" are derived from bandy; both of those names literally translate to "indoor bandy". Unihockey is derived from "universal hockey" since it is meant to be a special and simplified hockey form.

When the IFF was founded in 1986, the sport was played in mostly Nordic countries, Japan, and several parts of Europe. By 1990, floorball was recognized in 7 countries, and by the time of the first European Floorball Championships in 1994, that number had risen to 14. That number included the United States, who were the first country outside of Europe and Asia to recognize floorball. By the time of the first men's world championships in 1996, 20 nations played floorball, with 12 of them participating at the tournament. As of 2009, the sport of floorball has been played in almost 80 countries. Of those, 55 have national floorball associations that are recognized by the IFF. With the addition of Sierra Leone, Africa's first floorball nation, the IFF has at least one national association on each continent of the world, with the exception of Antarctica.

In December 2008, the IFF and the sport of floorball received recognition from the International Olympic Committee (IOC). In July 2011 the IOC officially welcomed the IFF into its family of International Sports Federations (ISF). This will pave the way for Floorball to enter the official sport programme. The IFF hopes that this recognition will help allow floorball to become a part of the 2020 Summer Olympics.