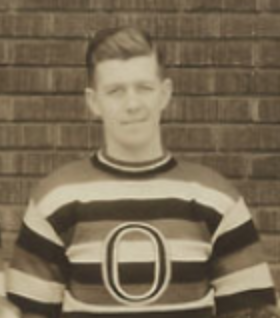 Forslund came to Canada in his youth and moved to Fort William and later Port Arthur, Ontario. Forslund would later play for the senior Port Arthur Ports and Fort William Forts. Forslund sat out the 1928-29 season because of injuries.

In 1929 Forslund moved to Minnesota, USA to play for the Duluth Hornets of the American Hockey Association, and played three years with the Hornets.

Forslund signed with the NHL Ottawa Senators in October, 1932, and became the first Swedish-born player in the NHL. He scored a total of 13 points, 4 goals and 9 assists in 48 games during the 1932-33 season.

Forslund then went on to play for the Windsor Bulldogs of the International Hockey League / IHL, and the Philadelphia Arrows and New Haven Eagles in the Can-Am Hockey League.

In 1936-37, Forslund stopped playing for a year to coach the senior Fort William Wanderers. He then returned to playing with the Duluth Zephyrs and Geraldton Gold Miners, and in 1939-40 season, Forslund led the Thunder Bay Senior League with 39 points in 24 games.

Forslund retired from Hockey in 1941, and helped organize youth Hockey.