Underwater Hockey - Octopush - Water Hockey is a global non-contact water sport in which teams compete to maneuver a puck / squid across the bottom of a swimming pool into goals / gulleys. Players who are most successful in this game are strong swimmers, have a great ability to hold their breath, and are able to create great speed underwater. It is also important that they are able to work well with the other members, taking full advantage of individual skills.

Two teams of up to ten players compete, with six players on each team in play at once. The remaining four players are continually substituted into play from a substitution area, which may be on deck or in the water outside the playing area, depending on tournament rules.

Before the start of play the puck is placed in the middle of the pool, and the players wait in the water, touching the wall above the goals they are defending. At the start-of-play signal (usually a buzzer or a gong), in-play members of both teams are free to swim anywhere in the play area and try to score by maneuvring the puck into the opponents' goal. Players hold their breath as they dive to the bottom of the pool (a form of dynamic apnoea, as in free-diving). Play continues until either a goal is scored, and players return to their wall to start a new point, or a break in play is signalled by a referee (whether due to a foul, a time-out, or the end of the period of play). Games consist of two halves, typically ten to fifteen minutes (depending on tournament rules; 15 minutes at world championship tournaments) and a short half-time interval. At half time the two teams switch ends.

A typical playing formation is the 3-3 (three offensive players or forwards, and three defensive players or backs). Other options include 2-3-1 (i.e., two forwards, three midfielders, and a back), 1-3-2, or 2-2-2. As important to tournament teams' formation strategy is the substitution strategy - substitution errors might result in a foul (too many players in the play area) or a tactical blunder (too few defenders in on a play).

There are a number of penalties described in the official underwater Hockey rules, ranging from the use of the stick against something (or someone) other than the puck, playing or stopping the puck with something other than the stick, and "blocking" (interposing one's self between a team-mate who possesses the puck and an opponent; one is allowed to play the puck, but not merely block opponents with one's body). If the penalty is minor, referees award an advantage puck - the team that committed the foul is pushed back 3 metres from the puck, while the other team gets free possession. For major penalties, such as a dangerous pass (e.g. at or near an opponent's head) or intentional or repeated fouls, the referees may eject players for a specified period of time or the remainder of the game. A defender committing a serious foul sufficiently close to his own goal may be penalized by the award of a penalty shot, or a penalty goal to the fouled player's team. Since this is an underwater sport, spectators may not be aware how aggressive underwater Hockey is. During the game players are known to pull off other players masks, kick them in the stomach with their flippers or even hit others with their stick. Although players can be penalized for actions such as these, many times it can go unnoticed. A safety kit is compulsory at all BOA tournaments including:

Headgear or cap with firm ear protectors clearly numbered between 1 and 15,
Mask with dual lenses with safety glass or other safety material fitted,
Non metal pliable snorkel with no sharp edges or ends,
Internal or external mouthguard,
Hand protection for the playing hand. The colour must strongly contrast with the colour of the players stick, the colour of the puck and the referees glove. (Players gloves must not be orange or yellow, black glove with black stick is not allowed, white glove with white stick is not allowed).
Fins must be made of non-dangerous material.
Fibre fins must be covered with a rubberised film to prevent a sharp or jagged edge if broken during play.
All edge rubbers must be in place and secure.
If any Referee believes any part of a players kit may be dangerous or may harm someone that player will not be allowed to play with that kit.
CMAS International Rules for Underwater Hockey
CMAS - Underwater Hockey - Referee Signals - Diagrams
Underwater Hockey Equipment 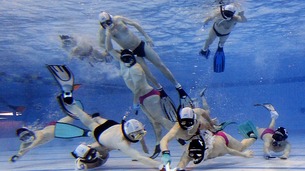 UNDERWATER HOCKEY - It's Played all around the World
UNDERWATER HOCKEY - A FUN GLOBAL SPORT with TEAMWORK Two teams of up to ten players compete, with six players on each team in play at once. The remaining four players are continually substit...

Underwater Hockey - Octopush was started in the United Kingdom by Alan Blake in 1954 where it was originally called Octopush. Blake of the newly formed Southsea Sub-Aqua Club and other divers including John Ventham, Jack Willis, and Frank Lilleker first played in Eastney Swimming Pool, Portsmouth, England. Originally called "Octopush" (and still known primarily by that name in the United Kingdom today) the original rules called for teams of eight players (hence "octo-"), a bat reminiscent of a tiny shuffleboard stick, called a "pusher" (hence the "-push"), an uncoated leadpuck called a "squid", and a goal known at first as a "cuttle" but soon thereafter a "gulley". The first rules were tested in a 1954 two-on-two game, and an announcement was made in the November 1954 issue of Neptune, the official news sheet of the British Sub-Aqua Club. The purpose behind the game was to keep members of Southsea Sub-Aqua Club #9 from abandoning the new club during the winter months when it was too cold to dive in the sea. The first octopush competition between clubs was a three-way tournament between teams from Southsea, Bournemouth and Brighton in early 1955. Southsea won then, and they are still highly ranked at national level today.

British Pathe footage of an early game at Aldershot Lido in 1967 is evidence of the evolution of the sport in terms of equipment and playing style. It can be seen that the game was much slower and the puck was not flicked at all, in contrast to the modern sport. The substantial changes in equipment, team size, and other factors have helped make the game the international sport it is today.

The sport spread to Durban, South Africa in the mid 50s by the spearfishermen of the Durban Undersea Club (DUC), when dirty summer seas prevented the young bloods from getting their weekly exercise and excitement. The first games were played in the pool of club member Max Doveton. However it soon became so popular that weekly contests were held in a Municipal pool. The UK's Octopush used a small paddle to push the puck whilst South Africans used a mini Hockey stick. The UK's version prevailed.

Underwater Hockey enjoys great popularity in the United Kingdom, Australia, Canada, New Zealand, South Africa, the United States, the Netherlands and France, as well as to a lesser extent in other countries such as Japan, Singapore, the Philippines, Belgium, Germany, Italy, Ireland, Spain, Portugal, Serbia, Slovenia, Switzerland, the Czech Republic, Hungary, Turkey, Brazil, Argentina,Colombia and Zimbabwe, and can be found in numerous additional countries (but not Moldova apparently).

The game first came to Canada in 1962 via Norm Liebeck, an unconventional Australian scuba diving instructor and dive shop owner, who introduced the sport to a Vancouver dive club. Ten years later, the Underwater Hockey Association of British Columbia (UHABC) was formed and received support from the BC government.

In Asia, the game first came to the Philippines in the late 1970s through the scuba diving community that became aware of octopush.

Underwater Hockey has been played in Australia since 1966 again by Norm Liebeck, an Australian who returned from Canada with his Canadian bride Marlene, and attracts players from a wide range of backgrounds. The first Australian Underwater Hockey Championship were held in Margaret River, Western Australia in 1975. A Women’s division was added to the championships in 1981 and a Junior division commenced in 1990.