Unicycle Hockey is a team sport, similar to roller or inline Hockey, except that each player must be mounted on a unicycle (with both feet on the pedals) to play the ball. A team is composed of five players (plus substitutes), but there is no dedicated goalkeeper role played by some clubs. The court used is between 35 and 45 metres in length, and 20 to 25 metres wide. It should have either beveled or rounded corners, and barriers on all sides. The goals are also set back from the end walls so that play can go behind them, similarly to ice Hockey.

Unicycle Hockey can, and is played in all types of indoor courts / gyms, streets, parking lots, tennis courts

Any stick which is legal for ice Hockey, other than that of a goalkeeper, can be used. The unicycles can have a maximum wheel diameter of 24 inches (61 cm) which is mostly used by goalies. A 20 inch wheel is prefered by most players, as it allows Quick turns, changing directions and fast excelleration.

A tennis ball is typically used in game play, although street Hockey balls are also permitted. 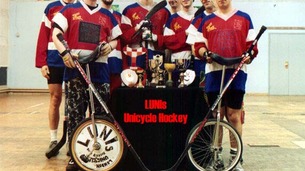 Varieté is a 1925 silent drama film directed by Ewald Andre Dupont - This film is believed to be the first documentation of unicycle Hockey – it contains a short sequence showing two people playing the game on a small stage, one player is using a Field Hockey stick - Circus Comedy The 1st mention of Unicycle Hockey was in The Bicycle Journal, August, 1960 with a article about the Albuquerque Unicycle Club in New Mexico, USA. Unicycle Hockey was played in Japan in 1971. Note the unique Hockey sticks. The first unicycle-Hockey team was LAHIMO. They started playing in 1985 some time after Takafumi Ogasawara had become tired of traveling around the world with his unicycle and had settled down in Monheim. He simply gave Christoph Verholt and Jochen Löffelmann unicycles and told them to learn how to ride. Two months later they had a demo-game at a local event. Since then Christoph has basically run the club. Until 1990, LAHIMO was the only German team. Then Jens Stemminger saw unicycle hockey at the European juggling convention 1990 in Oldenburg. He founded the Uniwheelers in Bremen. In 1991 Jojo Mühlmeyer and Rolf Sander from LAHIMO moved to the vicinity of Frankfurt. There they met Robert Mager, Martin Simeth and other enthusiastic unicyclists. They founded RADLOS in Frankfurt on 27 May 1991. Since then many other clubs have formed.
The first national unicycling Hockey competition in the UK was in 1988, at Covent Garden, London.
The first European championship was held at the European juggling convention at Leeds, Great Britain in 1993. It was organized by Lee Rickler. Both LAHIMO and Tous en piste didn't have enough players there, so the made a joined team which called itself LAHIMO on piste. They beat the London Lunis in the final 5:2.
In 1994 the World unicycling championships (UNICON) were in Minneapolis, Minnesota, USA. For the first time a Hockey tournament was included. Eight teams participated: Bochum (Germany), Canada, Germany, LAHIMO (Germany), Puerto Rico, TCUC (USA), USA, and a mixed team. Germany beat LAHIMO 10 to 9 in a very exciting championship final.
Unicycle Hockey follows rules basically similar to ice Hockey or inline Hockey, using a tennis ball and ice-Hockey sticks. Play is mostly non-contact. The sport has active leagues in Germany, Switzerland and the UK and international tournaments held at least bi-annually. Tournaments in the UK are held by various teams across the country usually in sports halls, but occasionally outside. Each tournament lasts a day and around 8 teams normally compete in a round-robin league with the winner being whoever has the most points. If two teams have the same number of points the winner can be decided by goal difference or a penalty shoot-out.
Antique Unicycle , England Unicycle Hockey , German Unicycle Hockey , London Unicyclists , Toronto Unicyclists , UK Unicycle Hockey League , Unicycle , Unicycle Game , Unicycle Hockey Club , Unicycle Tourament , Unicycle Hockey