Broomball is a recreational game originating in Canada and played around the world. It is mostly played in a ice hockey rink, either indoors or outdoors, on a lake, a pond or the gym floor. 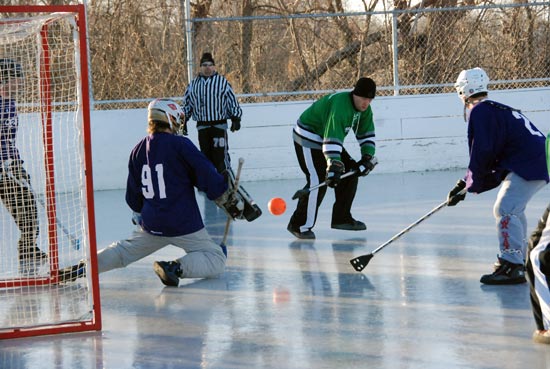 Broomball is a popular sport on all levels including - leagues, associations, organizations, businesses, schools and churches.

Players hit a small ball around the ice with a stick called a "broom".

The broom may have a wooden or aluminum shaft and has a rubber-molded triangular head similar in shape to that of a regular broom.

In a game of broomball there are two teams, each consisting of six players: a goaltender and five others. The object of the game is to score more goals than your opponent. Goals are scored by hitting the ball into your opponent's net using your broom. Tactics and plays are similar to those used in sports such as ice hockey, roller hockey and floorball.

Broomball is inexpensive to play, easy to learn, and fun for everyone to play. Male and female players are able to play on a more equal basis with the ice being a great equalizer, thus making the sport more enjoyable for the players.

Broomball is fun, anyway you play it

The 1st recorded Broomball games in North America were in Toronto in 1909.

There is some evidence to suggest broomball was being played in a small town in Canada, Massey, Ontario as early as the 1890s. Broomball 1st expanded to the northern United States of America, and by the early 1960s, there were organized games being played in Minnesota.

Broomball spread internationally over the following decades, and by the 1980s, organized broomball was being played in Australia, Japan, Sweden, Italy, Germany, and Switzerland.

The1st World Championships (then known as the Challenge Cup) were held in Victoria, British Columbia in 1991, and were attended by over 800 athletes and 44 teams. The Embrun Plumbing team were the 1st Mens champion and the Amigo Becancour were the 1st womens champion.