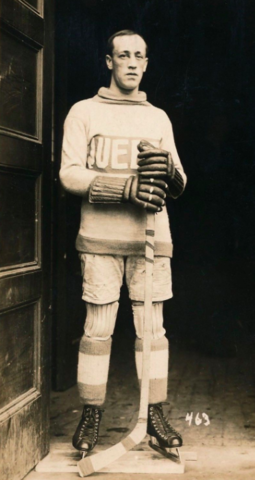 Marks played his first organized Hockey with the Belleville Intermediates in 1901, and would play senior Hockey in 1904 with the Brockville Hockey Club of the Federal Amateur Hockey League / FAHL, finishing 9th in scoring in his rookie year. He played for the Brockville team for two seasons. in December of 1906, he signed with the New Glasgow Cubs Stanley Cup challenge vs the Montreal Wanderers, scoring 2 goals in 1 of the 2 game total goals challenge series. This was the first series in which professional players played for the Stanley Cup.

Marks then turned professional with the Canadian Soo team of the International Professional Hockey League / IPHL for the 1906-07 season, scoring 13 goals, 10 assists in 14 games played.

In the 1907-08 Hockey season, Marks started with the Pittsburgh Lyceum of the Western Pennsylvania Hockey League / WPHL, and jumped after three games to the Brantford Professionals of the Ontario Professional Hockey League / OPHL. Marks joined the Toronto Professionals for their Stanley Cup challenge game on March 14, 1908 , and returned to Branford for the 1908-09 season.

Marks then jumped to the Canadian Hockey Association / CHA for four games with the All-Montreal team to start the 1909-10 season, but returned to Brantford after the CHA league folded. The Brantford team was now called the Redmen.

in late 1911, Marks went back to the United States, playing a season of exhibition games for a team called the Chicago All-Americans, which was attempting to start professional Hockey in Chicago.

Marks would play with Quebec until 1917 when the NHA folded, and the new National Hockey League / NHL started, where he was claimed by the Montreal Wanderers in the dispersal draft, November 26, 1917, playing in just 1 game for the Wanderers, before he was lent to the Toronto Arenas for the balance of the 1917-18 season, helping the Arenas win the 1918 Stanley Cup championship.

After sitting out the 1918-19 season, the NHL rights to Marks were transferred back the Bulldogs on November 25, 1919, and he played in 1 game before retiring.