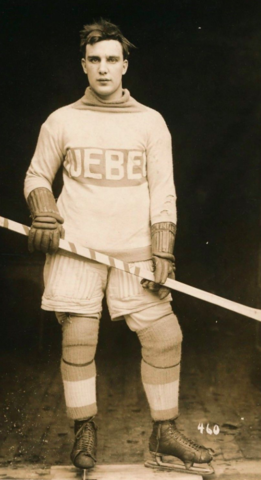 Mummery moved to Brandon, Manitoba at an early age. He first played Hockey at the senior-level for the Brandon Elks in 1907–08. From there he moved to Fort William, Ontario to play a season with the Fort William Forts in the Northern Ontario Hockey League. He returned to the prairies in 1911, and playied for Brandon and Moose Jaw in the Saskatchewan Professional Hockey League.

Mummery joined the Quebec Bulldogs of the National Hockey Association / NHA in 1912. In his rookie season the Bulldogs won the 1913 O'Brien Cup and successfully defended the Stanley Cup championship. He played with the Bulldogs until he was traded to the Montreal Canadiens in 1916. The Canadiens won the 1917 O'Brien Cup that season but lost to the Seattle Metropolitans in the Stanley Cup championship. After the season his rights reverted back to Quebec.

Before the beginning of the 1917–18 season the NHA ceased operations and the owners formed the National Hockey League / NHL. The players from the Quebec Bulldogs were dispersed to teams in the new NHL and Mummery was claimed by Toronto from Quebec in the Dispersal Draft, November 26, 1917, who were now run by the Toronto Arena Company. Mummery's defensive work was key in Toronto winning the 1918 Stanley Cup in a challenge series against the Vancouver Millionaires of the PCHA. After the season the Arena company formed the Toronto Arena Hockey Club and Mummery signed for the 1918–19 season. Unfortunately, the Arenas only managed to win 5 of their games over the course of the 18 game schedule and with poor attendance figures the team officially withdrew from the league on February 20, 1919.

Mummery was transferred back to Quebec by Toronto when Quebec franchise returned to NHL, November 25, 1919, which had joined the new league, for its third season. About 18 minutes into the second period of the February 4, 1920 game Quebec's goaltender was hurt. The game paused for intermission and during the break Quebec had to line up a new goaltender. Harry Mummery donned the pads for the final minutes of the second period and all of the third, though the game had been decided by the time he went in the net. Later in the season, he earned a win and a loss by playing two complete games in goal.

When the Quebec team was sold at the end of the 1919–20 season and transferred to Hamilton. While playing for the Tigers, he earned one more win to finish with a record of 2-1 as a goaltender.

Mummery was traded to the Montreal Canadiens where he played the 1920–21 NHL season.

Mummery was traded back to the Hamilton Tigers before the start of the 1921–22 season, playing parts of two season there before another trade in 1923 sent him to the Saskatoon Sheiks of the West Coast Hockey League. He played four games for Saskatoon in 1922–23 and retired.

Harry Mummery is a Honoured Member" of the Manitoba Hockey Hall of Fame, inducted in 1985.