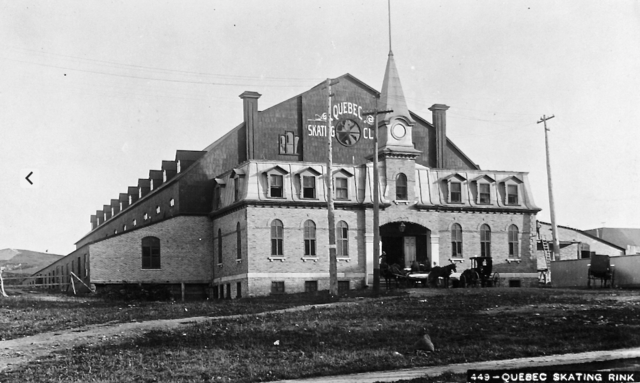 Starting in 1877, the Quebec Skating Club began operating a rink on the north side of the Grande Allée, inside the Saint-Jean-Baptiste (neighborhood).

The Saint-Jean-Baptiste district is located on the north side of the Quebec hill , at the top of the Sainte-Geneviève hill . It is located west of Old Quebec , north of the Parliament Hill of Quebec.

When the Parliament was being built, the Club had to move because it interfered with the new Parliament Hill development plans. The Quebec Skating Rink was then constructed in 1888 on the other side of the Grande Allée, within the present confines of the Plains of Abraham, where the Cross of Sacrifice now stands.

The building was also used by Laval University students and by intermediate and junior Hockey league teams. Fairs and exhibitions were staged there during the summer.

The future of the skating rink was called into question when the Battlefields Park was created in 1908, since this was where the park’s planned main entrance would stand. Negotiations were unsuccessful, and the club kept the land.

The building was later destroyed by fire in 1918.