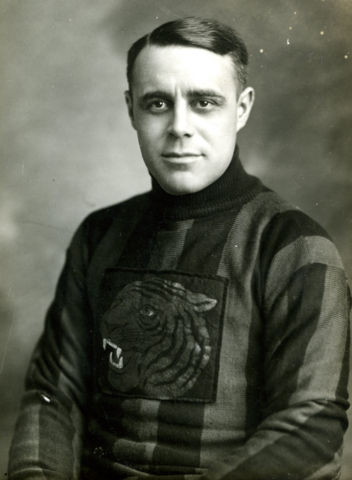 Malone grew up on the shores of the St. Lawrence River. He was a well-rounded athlete, playing Hockey, lacrosse and baseball as a boy. He played Hockey for his local parish - Club Columbia, in the church league.

Malone also played for the Quebec Seconds of the CAHL Intermediate division in 1908.

Malone, at the age of 19 started playing for the Quebec Bulldogs of the Eastern Canada Hockey Association in the 1909 season, scoring eight goals in 12 games. The next season the National Hockey Association / NHA formed, but Quebec was left out of the loop, so he played for the Waterloo Colts in the Ontario Professional Hockey League.

Rejoining Quebec in 1911, Malone was named the team captain and so served for the Bulldogs for the next six NHA seasons. Centering linemates such as Eddie Oatman and Tommy Marks.

In 1916-17 Malone scored 41 goals in 19 games for the NHA Quebec Bulldogs, including eight goals in one game during that league’s final season.

When the National Hockey League / NHL was founded in 1917, Quebec did not operate a team in the first season and the team's players were dispersed amongst the other teams. Malone was claimed by the Montreal Canadiens. Playing on what was one of the most powerful forward lines of all time with Newsy Lalonde and Didier Pitre, Malone shifted to left wing to accommodate the great Lalonde, and was the NHL's first scoring leader, registering 44 goals in 20 games, a record total that would stand as the NHL's single season goal scoring mark until 1945, when Maurice Richard scored his 45th goal on February 24 (42nd game). Rocket would score 50 goals in 50 games that season.

Malone scored his 1st NHL goal on December 19, 1917 vs Clint Benedict of the Ottawa Senators at 6:30 of the 1st period. He would score 5 goals in the game, including the game winner in a 7-4 victory for the Canadiens

Malone holds a record per-game average that stands to this day. (If such an average was sustained over today's 82-game schedule, it would result in 180 goals, nearly double Wayne Gretzky's record of 92.) Malone scored at least one goal (and a total of 35 goals) in his first 14 NHL games to set the record for the longest goal-scoring streak to begin an NHL career. This streak still stands as the second-longest goal-scoring streak in NHL history.

The following season, Malone returned to Quebec City for work purposes, as he was experienced in working with steel and moulds, and his knowledge was needed in the relaunch and retooling of the Ross Rifle factory on the Plains of Abraham. The factory was eventually purchased by The National Battlefields Commission in 1928 and closed.

Quebec revived its franchise in 1919 and Malone rejoined his club, once more leading the league in scoring with 39 goals, and setting a single game goal-scoring mark which still stands as the NHL record today - 7 goals in a game. The game was on January 31, 1920 vs the Toronto St. Pats. Malone scored 4 goals in the first 2 periods on Ivan “Mike” Mitchell, then the other 3 goals on Howard Lockhart who was in the St. Pats net for the 3rd period. The Bulldogs, also known as the Quebec Athletics this season, were a dismal team with only 4 wins vs 20 losses during the season.

While working with moulds for steel, designing custom tools and parts, Malone had deigned his own Hockey skates and blades, which were known as Joe Malone Tube Skates and/or Joe Malone Special. The Draper-Maynard Company would start to produce the skates in the early 1920s

- Joe Malone was inducted into the Canadian Sports Hall of Fame in 1975.