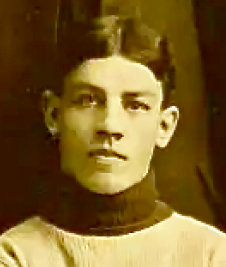 Hall moved to Canada at the age of two and his family settled in Winnipeg, Manitoba before moving to Brandon, Manitoba, where he learned to play Hockey.

Hall joined the Brandon Regals of the Manitoba Senior League in 1902, and then played with the Winnipeg Rowing Club for the 1903-4 season, helping them win the 1904 Western Canada Amateur Hockey League championship. He also got his first experience of playing for the Stanley Cup. The Winnipeg Rowing Club had challenged the Ottawa Hockey Club (Silver Seven) for the Stanley Cup, and they traveled to Ottawa, playing a best of 3 challenge at the Aberdeen Pavilion. Ottawa won the first game 9-1 on December 30, 1903, then Winnipeg won game two 6-2 on January 1, 1904 in which Hall scored 1 goal, then on January 4th, Ottawa won 2-0 to retain the Stanley Cup championship.

Hall returned to the Brandon Hockey Club for the 1904-5 season, then played 3 games with the Quebec Bulldogs before turning professional for the 1905-6 season with the Houghton-Portage Lakes Hockey Club of the International Professional Hockey League / IPHL. He was an IPHL first team All-star that year, scoring 33 goals in 20 games and leading the league with 98 penalty minutes, earning the nickname "Bad Joe" Hall for his aggressive style of play. At this stage of his career he played as a forward.

Returning to Brandon for the 1906-7 season, the Kenora Thistles 'borrowed' Hall for a Stanley Cup challenge two-game total goals series, where both Hall and Art Ross became the 1st players in Manitoba history to be paid as professional Hockey players. Despite not playing in the Stanley Cup series on January 17 and 21, 1907 as he was a spare, Bad Joe's presence was likely noticed by the opposition as the Thistles claimed the 1907 Stanley Cup championship. Hall received a 'loving cup' from the city of Kenora, for winning the Stanley Cup, which is on display in the Hockey Hall of Fame. He was also included on the official Kenora Thistles 1907 Stanley Cup championship team photo.

Hall would return to Brandon, and finish the season as captain of the Brandon Wheat Kings scoring 14 goals in nine games, and leading the Wheat Kings to a 1st place tie with the Thistles in the Manitoba Professional Hockey League / MPHL. The Wheat Kings and Thistles would play a a best-of-three series for the MPHL championship - The Thistles won both games 8-6 and 4-1.

After a number of violent incidents, Hall was suspended by the Manitoba Hockey League for rough play. He felt he was being given unfair attention due to his reputation. Indeed, all those who knew him would say that he was one of the games nicest people and the 'Bad Joe' moniker unfair.

Hall then went to Montreal, where he played for both the Montreal Hockey Club (4 games) and Montreal Shamrocks (4 games) during the 1907-8 season.

The 1908-9 season saw Hall playing for 3 teams, 1 game with the Edmonton Hockey Club, in which he scored 8 goals. He then returned to Montreal, as he was offered a large contract to play with the Montreal Wanderers (5 games) and then returned to Manitoba, where he joined the Winnipeg Maple Leafs late in the season, playing the final 2 regular season games, scoring 2 goals and then 2 playoff games vs the Winnipeg Shamrocks. Hall scored 2 playoff goals for the Maple Leafs, but the Shamrocks won the series.

Hall had now turned into a rough and tumble defenseman in professional Hockey's early days but at times he regretted his violent outbursts, saying once that he was "giving a dog a bad name."

Hall would join the National Hockey Association / NHA Quebec Bulldogs the following year, where he would remain for seven seasons. Hall would go scoreless in his first season with the Bulldogs in 1910-11, but would score 15 goals in 16 games the next season, including a overtime winner vs Ottawa on March 2, 1912 helping the Bulldogs win the O'Brien Trophy as 1911-12 NHA champions, also being awarded the Stanley Cup as league winners.

The Quebec Bulldogs won the 1912-13 NHA championship and the O'Brien Trophy again, along with retaining the Stanley Cup as league champions. Hall scored just 8 goals in 17 games during the regular season. The Bulldogs then played the Sydney Miners ("Millionaires") of the MPHL in the best of three challenge competition. Quebec scored 20 goals in total, winning game one 14-3 as Joe Malone scored nine goals. In game two, Hall earned a hat-trick to aid the Bulldogs in winning the game 6-2, and retaining the Stanley Cup.

After the Sydney series, Victoria challenged Quebec but the Bulldogs refused to put the Stanley Cup in competition so the two teams played an exhibition series with Victoria winning two games to one by scores of 7-5, 3-6, 6-1. It was the first meeting between the Eastern champions and the Western champions from the Pacific Coast Hockey Association.

Hall played for the Bulldogs for 4 more seasons, which they never made the playoffs again. Hall had developed a nasty feud with the Montreal Canadiens star forward Newsy Lalonde since the early days of the NHA.

When the NHL opened for business in 1917, the Quebec Bulldogs franchise was dissolved and the Montreal Canadiens did not hesitate to grab Hall in the dispersal draft. Lalonde and Hall were now teammates, roomed together and became the best of friends.

Hall had 8 goals (15 points) and earned 100 penalty minutes in his first season with the Canadiens, including 2 assists in the very 1st NHL game on December 19, 1917 vs the Ottawa Senators in a 7-4 Canadiens victory. Montreal had won the first half of the NHL split season with 20 points and the Toronto Arenas had won the second half with 10. The two teams then played a two-game total goals series for the NHL championship. This was Toronto's first playoff series. The Arenas won the series and advanced to the Stanley Cup Finals.

The following season Hall scored 7 goals and just 1 assist during 17 regular season games. He went scoreless in the 1919 playoffs vs the Ottawa Senators, as the Canadiens would win the NHL championship 4-1 in a best of 7.

The Canadiens would then head West in the spring of 1919 to challenge the Pacific Coast Hockey League's Seattle Metropolitans for the Stanley Cup. This was the second playoff meeting between the Montreal and the Metropolitans. Their only previous meeting came in the 1917 Stanley Cup Finals which Seattle won in 4 games. With the series tied after five games (with one tie), the sixth game was slated for April 1, 1919, when the Spanish Flu epidemic forced the cancellation of the series. Several players on both sides were sick because of it, and it would eventually claim the life of Canadiens' forward, 37 year old Joe Hall five days later. Canadiens manager George Kennedy would not recover completely. This was the only time in Hockey history when the Stanley Cup was not awarded after the playoffs began.

Joe Hall was inducted into the Hockey Hall of Fame in 1961.