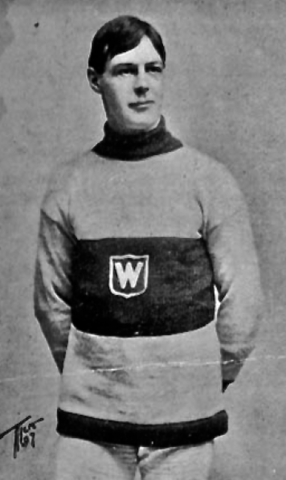 Stuart grew up in Ottawa, had 2 brothers, 2 sisters, so had a competitive household. He played football and rugby at a very high level, but ice Hockey was his love. A big guy at 6' 190 lbs, Stuart was known for his skating speed and toughness.

Stuart is referenced as playing for the Rat Portage Thistles in 1895-96, but there is no records of this and the Rat Portage was a new team founded in 1894. Hod would have been 16 years old at this point, so we'll disregard that reference.

It is known that Stuart left for the Klondike Gold Rush in the spring of 1897, seeking his fortune along with others. Unsuccessful, Stuart had returned to Ottawa by the fall of 1898, playing his first senior football game for the Ottawa Rough Riders on November 24,

Hod and his brother Bruce had also joined the Ottawa Hockey Club, and helped them win the Intermediate Canadian Amateur Hockey League / C.A.H.L. championship for the 1898-99 season.

Stuart was also working working for the family construction business, who were quite busy constructing buildings. Hod and Bruce left Ottawa for Quebec City in the summer of 1900 for business, also joining the Quebec Hockey Club / Quebec Bulldogs, where they both played in 1901 C.A.H.L. season. Hod played another season for the Bulldogs the next year, scoring a reported 5 goals in 8 games.

Both Hod and Bruce were lured south for the 1902-03 Hockey season, joining teams in the Western Pennsylvania Hockey League / WPHL, a semi-pro league (the first professional ice Hockey league) that was known to pay good Hockey players for their services. Hod joined the Pittsburgh Bankers and Bruce the Pittsburgh Victorias. Hod had a solid year on defence / cover-point for the Bankers with 7 goal (8 assists) in 13 games, and another goal with 2 assists in 4 games, as the Bankers won the WPHL championship for the 1902-03 season.

Hod and Bruce then joined the Portage Lake Hockey Club for the 1903-04 season. They played in the famous Houghton Amphidrome. The team played their season as exhibition, as they had not yet joined the International Professional Hockey League / IPHL. Hod had a solid season, scoring 13 goals in 14 games played during their regular schedule, then another 4 goals in 9 playoff games, as then the Portage Lake Hockey Club won American Championship over the Pittsburgh Victorias. They then played the Montreal Wanderers, champions of the Federal Amateur Hockey League / FAHL, who had challenged Portage Lake for what was promoted as the World's Championship. Portage defeated the Wanderers in the 2 game series 8-4 and 9-2 for the championship and had World's Champions 1904 imprinted on their year end team cabinet photo.

Hod then joined the Calumet Miners for the 1904-05 IPHL season, scoring 18 goals in 22 games. He played 1 game for them at the start of the next season, but jumped teams and a better playing contract with the Pittsburgh Professionals, where he scored 11 goals in 20 games.

Hod Stuart had made a solid name for himself now, and many of the top players and executives considered him to be the best cover-point in the game of Hockey at that point, and that he had also helped revolutionize the game of the puck rushing defenceman.

Hod started the 1906-07 season with the Pittsburgh Professionals, but was lured back to Canada after playing 4 games for Pittsburgh, as the Montreal Wanderers of the recently formed Eastern Canada Amateur Hockey Association / ECAHA were offering big playing contracts for the best players. Hod who was unhappy playing in Pittsburgh because of the violence involved in games, heard from Dickie Boon that the Montreal Wanderers, defending Stanley Cup holders, of the ECAHA were willing to make Stuart the highest paid player in Hockey if he were to join the team. On December 13, 1906, Stuart had a letter published in the Montreal Star that detailed his problems with the IPHL. Stuart's chief concern was the officiating; he said they "don't know how to run Hockey over here, the rink people appoint the most dumb and incompetent referees that could be found." In December 1906 Pittsburgh refused to play a game against Michigan Soo, claiming they did not like the choice of referee. While a common problem in the IPHL, Pittsburgh's management believed Stuart was behind the action, and released him from the team. No longer bound to any team, Stuart joined the Wanderers.

Hod took part in the Wanderers (as a spare) Stanley Cup challenge against the New Glasgow Cubs, a team from Nova Scotia, on December 27 and 29, 1906, and along with teammates Riley Hern, Frank Glass, Moose Johnson and Jack Marshall, became the first professional Hockey players to compete for the Stanley Cup.

Hod's first game with the Wanderers was watched by a reported 6,069 fans, one of the largest audiences to see a Hockey game in Canada to that point. The Wanderers defeated the Montreal Victorias at the Victoria Skating Rink on January 2, 1907. Stuart played in 8 regular season games for the Wanderers, scoring 3 goals.

Stuart did not escape violence in the ECAHA. On January 12, 1907, the Wanderers faced the Ottawa Senators, a game the Wanderers ultimately won 4–2. Charles Spittal of Ottawa was described as "attempting to split Cecil Blachford's skull", Alf Smith hit Stuart "across the temple with his stick, laying him out like a corpse", and Harry Smith cracked his stick across Ernie "Moose" Johnson's face, breaking Johnson's nose. Stuart was commended for his actions during the game; it was said that he neither flinched nor retaliated, even after bearing most of the hits. At a league meeting on January 18, Montreal proposed suspending Spittal and Alf Smith for the season in response to their actions, but this was voted down and the president of the league, Fred McRobie.

The next time the Senators visited Montreal for a game, the police arrested Spittal, Alf and Harry Smith, leading to $20 fines for Spittal and Alf, and an acquittal for Harry. Even with the persistent violence, Stuart helped the Wanderers to an undefeated season.

The Wanderers then accepted a challenge from the Kenora Thistles for the Stanley Cup. The Thistles won the series (4-2 & 8-6, held on January 17th and 21st, but lost a rematch between the teams on March 23rd and 25th, giving the Stanley Cup back to the Wanderers. Stuart participated in both challenges, and though did not score a goal in any of the four games, he was said to have played the best game of his career in the first game of the series, even with a broken finger.

Regarded as the most important player on the Wanderers, Stuart was said to know how to play every position on the ice, and passed his knowledge of the game onto his teammates.

With the 1907 Hockey season over, Stuart was sent to Belleville, Ontario, to oversee the building of the Belleville Drill Shed, one of his father's contracts. On the afternoon of Sunday June 23, 1907, Stuart went to the Bay of Quinte, near Belleville, to canoe and swim with some friends. Stuart swam to the nearby lighthouse, about half a kilometre away from his group, climbed onto a small platform around the lighthouse, about six or eight feet above the water, and those watching from the dock saw Stuart climb up and rest for a few minutes before diving in again. He didn’t re-surface. Unaware of how shallow it was in certain places around the lighthouse, Stuart struck his head on a jagged rock just two feet below the waterline. He suffered a fractured skull and a broken neck, and was said to have died instantly.

His body was brought back to Ottawa for his funeral on June 24, many of Stuart's close colleagues in the tight-knit Hockey community would pay tribute to the late sportsman. Representatives from the Ottawa Hockey Club, Ottawa Rowing Club, Ottawa Football Club, St. Patrick's Football Club, Ottawa Victorias and Montreal Wanderers were all present at the funeral services alongside family, friends and several city aldermen, all expressing regret for the passing of one of the city's most distinguished athletes. James Strachan, president of the Montreal Wanderers, called him "a splendid Hockey player, and one of the finest fellows in the game,"

He was buried at Beechwood Cemetery.

To raise money for Stuart's widow and two children, the ECAHA decided to host an all-star game, the first of its kind to be played in any sport. An estimated 3,800 spectators attended the Hod Stuart Memorial Game on January 2, 1908, with tickets selling out days in advance. Described by the Montreal Herald as "unique in the history of Hockey in Montreal, if not in the whole of Canada," the event featured the Montreal Wanderers, Stuart's former team, playing against a squad of top players from the other teams in the ECAHA. The Westmount Arena agreed to host the event for no charge, and all proceeds from the game went to Stuart's family, totaling over $2,100.

The Wanderers Roster - Riley Hern, Art Ross, Walter Smaill, Frank Glass, Ernie Russell, Cecil Blachford, Ernie Johnson played better than the All-Stars, who had to learn to play together, and led 7–1 after the first half of the game; though the All-Stars played better in the second half, the Wanderers won by a score of 10–7.

The Hockey Hall of Fame was created in 1945 and Hod Stuart became one of the first nine players to be inducted. He was joined there by his brother Bruce in 1961.