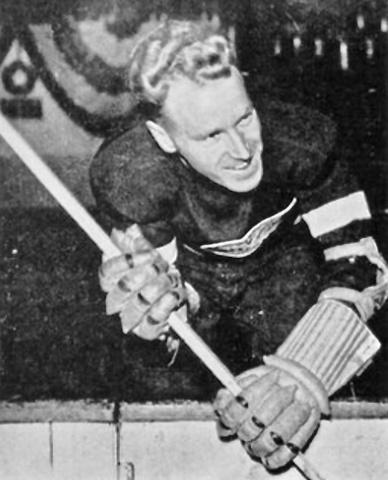 Pettinger played junior Hockey for the Regina Pats from 1928 to 1930, winning the Abbott Cup as western Canada champions and Memorial Cup in 1930. and was a league-leading scorer from 1928 to 1930.

Pettinger turned pro with the Vancouver Lions of the Pacific Coast Hockey League / PCHL in 1930-31. He stayed on for one season and then signed as a free agent with the New York Rangers' organization, and went east to skate for the Bronx Tigers of the Canadian-American Hockey League / Can-Am league.

Pettinger switched to the Springfield Indians for the start of the 1932-33 Can-Am season, playing 13 games with 7 goals (5 assists) and getting the attention of the Rangers.

Pettinger then made his NHL debut with the New York Rangers on Christmas Day 1932 vs Montreal Maroons at Madison Square Garden in a 2-0 Rangers win.

Pettinger scored his 1st NHL goal vs Bill Beveridge of the Ottawa Senators on December 29, 1932 at Madison Square Garden at 18:44 of the 1st period in a 4-2 Rangers win.

It was Pettinger's only goal of the season, but his his solid play helped him remain in New York for the remainder of the season, as the Rangers would go on to play the Toronto Maple Leafs in the 1933 Stanley Cup finals, winning the championship 3 games to 1.

Before the start of the 1933-34 season, Pettinger's rights were sold to the Detroit Red Wings. He made his debut with the Red Wings on opening night of the 1933-34 NHL season and would help Detroit win their 1st Prince of Wales Trophy as American Division regular season champions 1933-34.

Over the 4 seasons that Pettinger was in Detroit, he split his time between the minors (Detroit Olympics & London Tecumsehs) and the Red Wings. The good news is that he tended to be around whenever the Red Wings entered the playoffs. In the post-season of 1935-36, he scored 2 goals and 2 assists in the finals to help defeat the Toronto Maple Leafs to win the 1936 Stanley Cup championship.

Shortly after the start of the 1937-38 campaign, Pettinger was traded to the Boston Bruins where he had his best offensive output in the 1938-39 season, scoring 11 goals (13 assists) in 48 games plus a return trip to the Stanley Cup finals where his team defeated the Maple Leafs to win the 1939 Stanley Cup championship. The win was Pettinger's fourth and final Stanley Cup victory.

Pettinger played half of the 1939-40 season with the Bruins, then joining the Hershey Bears of the American Hockey League / AHL. He helped Hershey to Calder Cup finals in 1941 and 1942.

Pettinger then served over 2 years with the Canadian Forces during WWII before returning to Hershey for the 1944-45 AHL season. He finished this season with the Cleveland Barons (12 games).

Pettinger then joined the Regina Capitals of the Western Canada Senior Hockey League / WCSHL where he retired in the 1945-46 season.