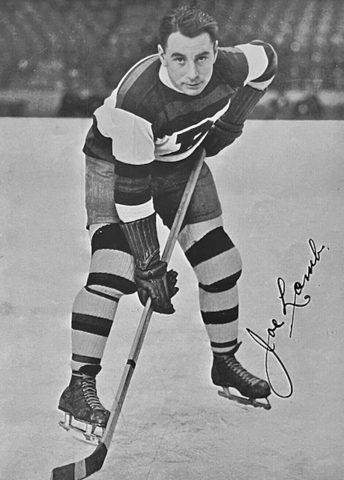 All that Hockey playing in the City of Montreal got Lamb noticed, and he was signed as a free agent by NHL Montreal Maroons, January 29, 1928, making his NHL debut on January 31 vs the New York Rangers at Madison Square Garden. He played the final 21 games of the regular season for the Maroons, scoring 8 goals, 5 assists. Lamb scored his 1st NHL goal vs Charlie Gardiner of the Chicago Black Hawks on February 10, 1928 at 7:15 of the 1st period at Chicago Coliseum in a 3-2 Montreal win.

Lamb also scored 1 goal during the Maroons playoffs, as they made it to the Stanley Cup finals, losing to the New York Rangers.

Lamb was again traded, this time to the Montreal Canadiens for Johnny Gagnon, October 2, 1934. While in Montreal, Lamb would become the 1st Hockey player to wear the number 99 jersey on November 10, 1934 playing for the Canadiens in their season opener, a 2-1 OT loss to the Toronto Maple Leafs.