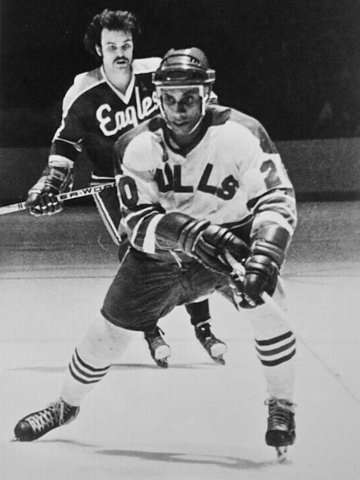 While playing for the Quebec Aces, Willie O'Ree made his NHL debut with the Boston Bruins on January 18, 1958 vs Montreal Canadiens at The Forum in a 3-0 Boston win. He played in the back to back games vs the Canadiens (January 19) going pointless and returned to the Aces.

O'Ree played 2 more seasons with the Quebec Aces, including 6 games with the Springfield Indians in the AHL. He then joined the Kingston Frontenacs for one season (1959-60) in the Eastern Professional Hockey League / EPHL.

O'Ree started the 1960-61 EPHL season with the Hull-Ottawa Canadiens, playing 16 games when the Boston Bruins called him back to the NHL, playing against the Red Wings at Boston Garden on November 19. O'Ree would play in 43 games for the Bruins that season.

Willie O'Ree scored his 1st NHL goal vs Charlie Hodge of the Montreal Canadiens on January 1, 1961 at Boston Garden at 10:07 of the 3rd period in a 3-2 Boston win. His goal was the game winner.

O'Ree scored his final NHL goal vs Glenn Hall of the Chicago Black Hawks on the final day of the NHL regular season - March 19, 1961 at Boston Garden in a 4-3 Bruins win. O'Ree also got into a scuffle with Black Hawks Eric Nesterenko late in the 1st period, with both receiving penalties.

After playing for the Los Angeles Blades of the Western Hockey League / WHL for 6 seasons, including reaching the finals of the 1964 Lester Patrick Cup, O'Ree joined the last place San Diego Gulls for the 1967-68 WHL season. His leadership and experience impacted San Diego right away, as they made the playoffs. O'Ree played for the Gulls for 7 seasons, always making the playoffs. He actually retired in the San Diego area after playing a few years in the Southern California senior league and one last year as a pro in the new Pacific Hockey League in 1978 with the San Diego Hawks.

Willie O'Ree was awarded the Lester Patrick Award for outstanding service to Hockey in the United States in 2003.

Willie O'Ree was appointed the Order of New Brunswick in 2005

Willie E. O'Ree was awarded the Order of Canada in 2008

Willie O'Ree was elected to the Breitbard Hall of Fame in the San Diego Hall of Champions in 2008.

Willie O'Ree was inducted into the Hockey Hall of Fame in 2018.

Willie O'Ree was inducted into Canada's Sports Hall of Fame in 2021, but they have not put him into their online gallery !