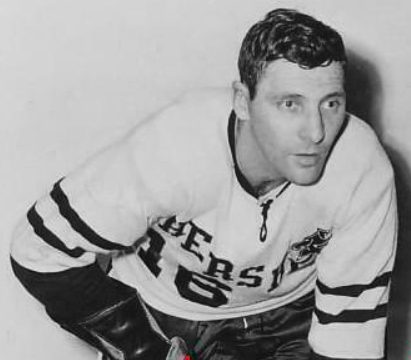 Marshall played his first junior Hockey for Toronto St. Michael's Majors in the 1948-49 season, scoring 13 goals, 18 assists as a rookie, then the next season really took his game to another level by scoring 39 goals, 27 assists in just 43 games.

The Guelph Biltmores (Mad Hatters) became interested in Marshall and wanted him on their team for the 1950-51 season. They offered him a contract that was unheard of in those days for such a young player - $500 signing bonus, a salary for $2500 for the season, that also had a bonus for goal production. Well, St. Michael's Majors were not happy about losing him, and their parent team, the Toronto Marlboros also had concerns about losing him, so in stepped the executive from the Ontario Hockey Association / OHA to resolve everything. The OHA ruled in Marshall's favour, and allowed him to play with the Biltmores. But, after just 4 games playing for the Biltmores, the deal that Guelph had made with the St. Micheals Majors had failed, and then the OHA executive ruled that Marshall had to go back to the Majors. At the conclusion of St. Michael's season in early March of 1951, Marshall would play for his third team. He joined the St. Michael's Monarchs who were a senior team in the OHA, helping them reach the finals of the 1951 Alexander Cup.

Marshall joined the Charlottetown Islanders, a professional Hockey team in the Maritime Major Hockey League / MMHL for the 1951-52 season. He scored 50 goals, 44 assists in 84 games. As a pro, this would be the only season Marshall scored 50 goals or more.

As property of the Toronto Maple Leafs, Marshall began his American Hockey League / AHL career in the 1952-53 season with the Pittsburgh Hornets, scoring 27 goals, 39 assists during the regular season, and 1 goal, 8 assists in the playoffs, helping the Hornets reach the 1953 Calder Cup finals, losing in overtime of game 7 for the championship. This would be the first of 13 seasons in which Marshall would lead his AHL team in scoring. During this season, Marshall also played his first two NHL games on February 28 and March 1, 1953 for the Maple Leafs (0 points).

Over the next 3 seasons, Marshall played almost all his games for Pittsburgh, but did get in 16 games for the Maple Leafs during the 1954-55 season, scoring his 1st NHL goal (and only) on November 27 vs the New York Rangers. The Hornets won the 1955 F. G. "Teddy" Oke Trophy as AHL regular season champions, and Marshall led Pittsburgh during the playoffs with 9 goals, 7 assists, helping the Hornets win the 1955 Calder Cup championship.

The 1955-56 season was memorable one for Marshall, as he played in the AHL All-Star Game on January 10, 1956. The contest was held in Pittsburgh with the Hornets taking on the AHL All-Stars. With Pittsburgh trailing 4-3, coach Meeker pulled his goalie, Gil Mayer, at 18:21 of the third period. Marshall scored with 1:05 remaining and sent the game into overtime. The final score was 4-4, after neither team was successful scoring in the 10-minute overtime.

His value to the Hornets was best described by his coach in Pittsburgh, Howie Meeker, who said "Willie Marshall is the Ted Kennedy of Pittsburgh."

Following the 1955-56 season, in which Marshall was named a First Team AHL All-Star, Duquesne Gardens, Pittsburgh's home ice was torn down and the Hornets were forced into dormancy; Marshall was sold to the Detroit Red Wings, with Gil Mayer, Jack Price, Bob Hassard, Bob Solinger and Ray Gariepy on July 7, 1956 and sent to their farm team in the AHL, the Hershey Bears. After finishing second in the AHL scoring race in 1956 and 1957, Marshall won his first – and only AHL scoring title in 1957-58, with 40 goals and 104 points in the regular season, being awarded the John B. Sollenberger Trophy. He scored 10 goals, 9 assists in the playoffs as the Bears won the 1958 Calder Cup championship. Marshall actually scored the championship winning goal at 16:55 of the third period in game 6.

Marshall was then traded back to the NHL Maple Leafs by Hershey for Mike Nykoluk, Ron Hurst and the loan of Wally Boyer for the 1958-59 and 1959-60 seasons, April 29, 1958. Toronto sent him to the AHL Rochester Americans, but after playing just 19 games for Rochester and 9 for the Maple Leafs, he was loaned to Detroit by Toronto with cash for Gerry Ehman, December 23, 1958 and sent back to Hershey, where he finished the season, helping the Bears win the 1959 Calder Cup championship, scoring 5 goals, 2 assists in the playoffs.

Marshall was then traded to the AHL Providence Reds (Boston Bruins) by Hershey for Dan Poliziani, June, 1963, and he played there for 3 seasons.

Marshall was then traded to the AHL Baltimore Clippers by Providence with Aldo Guidolin, Ian Anderson and Jim Bartlett for Ken Stephanson, Ed Lawson and Mike Corbett, June, 1966. He would play 5 full seasons in Baltimore.

Marshall then signed as a free agent with IHL Toledo Hornets following release by Rochester (AHL), October 15, 1971, playing 46 games for Toledo before they traded him back to Rochester for cash, March 1, 1972 to finish up the 1971-72 season, his record-tying 20th in the AHL. He played his final 10 games in the AHL to close out the season, and his playing career.

In 2004, the American Hockey League honored Marshall at the All-Star Classic in Grand Rapids and unveiled the Willie Marshall Award, which is now presented annually to the AHL player who scores the most goals each season.

Marshall still ranks fifth on the Hershey Bears’ franchise scoring list with 570 points in 439 games, and his number 16 has been retired by the club.

Willie Marshall was inducted into the AHL Hall of Fame in 2006.