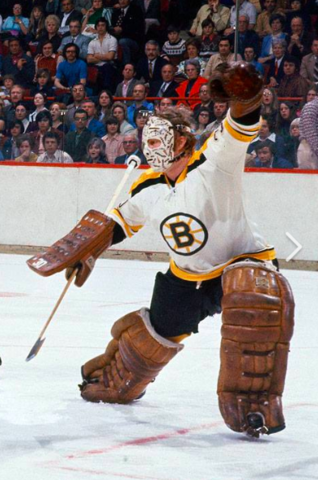 Cheevers played all his minor Hockey in St. Catharines, a area that would become known as "Little NHL" a term started by Cheevers father Joe and a guy named Paul Judd. There were many city teams for all the kids playing Hockey, and Cheevers played at the Garden City Arena.

In 1956, Cheevers was sent to St. Michael's College in Toronto, which was a premier place for Hockey development, and who were also sponsored by the Toronto Maple Leafs.

Cheevers was the youngest goalie at St Michael's College (St. Michael's Majors), and only played 1 game for the Majors in both the 1956-57 season and in 1957-58. He played 6 games during the 1958-59 season before becoming the Majors starting goalie for the 1959-60 season. While Cheevers played just average goaltending as a starter for the Majors, it was during the 1961 playoffs that he really found his game, backstopping the Majors to the J. Ross Robertson Cup championship, the George Richardson Memorial Trophy championship and the Memorial Cup championship, where he picked up his first important shutout in the first game of the finals. Cheevers actually played part of that final junior season as a forward.

"In my last year of junior, I played a month of forward," Cheevers recalled in an interview with the Hockey Hall of Fame. "They needed a goaltender for the next year, and Dave Dryden was available, but he could only come to the team if he could play ten or twelve games that year. Coach Father David Bauer made a deal with him and put me at forward to satisfy both Dave Dryden and to show me what it was like to play forward. I played ten or twelve games at forward that year. I was never so happy to get back in goal! A lot of guys were trying to get even for wayward sticks in the crease! I could always skate. I was just missing the instinct of knowing what to do with the puck."

Cheevers turned pro to start the 1961-62 season, and he would play for 4 teams during the season, starting with the Pittsburgh Hornets, a team returning to the American Hockey League / AHL after a five year hiatus. He had 2 wins, 2 losses and a tie with Pittsburgh before joining the Sault Thunderbirds of the Eastern Provincial Hockey League / EPHL for 29 games. While playing for the Thunderbirds, Cheevers made his NHL debut with the Toronto Maple Leafs on December 2, 1961, backstopping the Maple Leafs to a 6-4 win over the Chicago Black Hawks. Stan Mikita would score the 1st NHL goal against Cheevers for Chicago. Cheevers played 1 more game for Toronto the next night in Detroit, where Norm Ullman scored the 1st hat-trick against him in a 3-1 victory for the Red Wings. Cheevers returned to the Thunderbirds, before joining the AHL Rochester Americans where he finished the season.

Cheevers then split the 1962-63 season between the Sudbury Wolves of the EPHL and Rochester of the AHL. Cheevers played two more seasons in Rochester, backstopping the Americans to first overall in the 1964-65 regular season, and the 1965 Calder Cup championship. He also won the 1964-65 Harry "Hap" Holmes Memorial Award for the lowest goals against average in the AHL, and was selected as the AHL's First Team All-Star netminder.

Cheevers was claimed from Toronto by the Boston Bruins in the Intra-League Draft in the summer of 1965, and made his NHL Bruins debut on October 27, 1965 vs the Maple Leafs in a 2-1 loss. He played only 7 games that season for the Bruins because of a injury, and played most of the season for the Oklahoma City Blazers of the Central Professional Hockey League / CPHL.

Cheevers split the 1966-67 between Boston and Oklahoma City where he helped the Blazers win the 1967 CPHL championship. He also recorded his 1st NHL shutout on November 10, 1966 vs the Toronto Maple Leafs.

The Bruins had drafted Bobby Orr, made a trade for Phil Esposito, Ken Hodge and Fred Stanfield, which triggered Cheevers 'I've gotta be on that team.'"

Cheevers was now the Bruins starting goalie for the 1967-68 season and he would never look back to the minors. Cheevers also starting wearing a mask, debuting it on October 11, 1967 in a 4-4 tie with the Detroit Red Wings.

Boston would make the 1968 NHL playoffs, after missing the post season for 8 straight years. They lost to Montreal, but the Bruins team was on the up & up.

Cheevers and Eddie Johnson would share the net-minding duties for the Bruins during the 1968-69 season. Cheevers had started wearing a Ernie Higgins mask, and after been hit in the mask by a puck in practice, he asked trainer John "Frosty" Forristall to paint a stitch mark on his mask. Frosty painted the first stitch mark above the right eye. The theme stuck, and every time Cheevers took a puck to the mask, Frosty added another stitch mark on it, and the rest is History, as Cheevers mask would start a mask painting trend that would never stop.

Cheevers recorded his 1st NHL playoff shutout on April 2, 1969 vs the Toronto Maple Leafs. In fact he recorded back to back shutouts vs the Maple Leafs (April 3), as the Bruins won the series 4-0, and would face Montreal in the semi-finals for the Stanley Cup. The Bruins & Canadiens series went 6 games, 3 of them to overtime, including a double overtime, before Jean Beliveau scored to win the series for Montreal.

The 1969-70 season saw the Bruins finish tied with the Black Hawks for 1st place during the NHL regular season, which again saw Cheevers and Johnson split the goaltending duties, but in the playoffs, it was Cheevers who the Bruins were depending on, and he delivered, winning the first round vs the New York Rangers 4-2 in games, then backstopped the Bruins 4-0 in games vs the Black Hawks in the semi-finals, and again 4-0 in the finals vs the St. Louis Blues, where Bobby Orr scored one of the most famous goals in Hockey history, as the Bruins won game 4 in overtime to claim the 1970 Stanley Cup championship.

Cheevers and Johnson backstopped the Bruins to 1st place in the 1970-71 NHL regular season, but the Bruins lost to Montreal in the first round of the 1971 playoffs.

Cheevers then published the book "Goaltender", detailing his experiences during the 1970-71 season, through to the unexpected loss in the first round to the underdog Montreal Canadiens.

Boston again finished 1st overall during the NHL regular season (1971-71) with Cheevers and Johnson splitting the netminding duties. Cheevers went undefeated in 32 consecutive games, a NHL record that still stands. The duo also rotated during the 1972 playoffs, with the Bruins reaching the finals again, and Cheevers was in net when Boston shut out the New York Rangers 3-0 in game 6 at Madison Square Gardens to win the 1972 Stanley Cup championship.

The World Hockey Association / WHA was about to start for the 1972-73 season as a competitor to the NHL, and they drafted many of the NHL players for various teams in their league. Cheevers was was selected by the New England Whalers in the inaugural WHA draft, but his rights were traded to the Cleveland Crusaders prior to the WHA's debut season.

The Crusaders offered Cheevers a 7-year, $1.4M contract to play in the World Hockey Association. It seemed rather peculiar that Cheevers, just after having won a second Stanley Cup with a dominant Bruins line-up, would leave for other pastures. "I was struggling to make the money I thought I deserved with the Bruins," Cheevers later explained. "They had a negotiator who was a pretty hardcore guy. He was a lawyer and didn't know much about Hockey." During that heady 1971-72 season, Cheevers was only in goal for five Bruins' losses. "They offered me a very minimal raise. It sort of hit me. I called Tommy Johnson, who was our coach, and said, 'Tommy, I can't take this. I've got an offer that'll stagger you.' He said, 'Don't do anything. Come back in three or four days,' so I cam back in three or four days and Tommy said, 'I'm here to offer you whatever the other team offered you.' I told him what Cleveland offered and he said, 'Can't do it, Gerry. Do they need a coach?'"

So, Cheevers jumped teams and leagues to become one of the marquee players in the new WHA, as the Crusaders starting goalie.

Playing out of the 9300 seat Cleveland Arena, initial attendance was one of the better of the league. Cleveland put together a defensively-minded squad which included former NHLer Paul Shmyr, that rode Cheevers to second place in the East and third overall in the WHA, allowing the fewest number of goals with 239. Their first round playoff opponents were the Philadelphia Blazers. Though nearly evenly matched in every stat, the Crusaders swept the Blazers in 4 games due largely in part to Cheevers' stellar play. Unfortunately though, their inaugural run at the Avco Cup fell short in the second round, dropping to the eventual champion New England Whalers in 5. Though little consolation, Cheevers was awarded the first ever Ben Hatskin Trophy for best goaltender. Cheevers played three and a half seasons for the Cleveland Crusaders. He made the First All-Star Team in 1973 and Second All-Star Team in 1974 and 1975.

Cheevers also played seven of the eight games for WHA Team Canada in the 1974 Summit Series vs the Soviets; he missed game three to attend the funeral of his father.

The Cleveland ownership were having financial problems with their WHA franchise, Cheevers had a financial dispute with the Crusaders' management, and half way through the 1975-76 season, Cheevers, who had already met with the Boston Bruins management privately, resigned from his WHA contract, and rejoined the Bruins who would welcome him back to the NHL.

Cheevers remained the Bruins' netminder for the next 4 seasons, helping Boston reach the finals in 1976-77 and 1977-78. He and Gilles Gilbert were runners-up for the 1979-80 Vezina Trophy, which was won by Don Edwards and Bob Sauvé of the Buffalo Sabres. He retired at the end of that season.

Cheevers played for NHL All Stars in the 1979 Challenge Cup vs. Team Soviet Union.

Cheevers was an extremely popular figure and among the most entertaining goaltenders in hockey history. He had a style described as "aggressive and instinctive" not afraid to mix it up and take matters into his own hands. He loved to skate around the ice and handle the puck, becoming one of the earliest goalies to roam the ice. A standup goalie who charged out of his net to challenge shooters, he was far from the perfect textbook goalie. Instead he relied on great reflexes and anticipation, often making saves look incredibly spectacular.

Cheevers was named head coach of the Bruins for the start of the 1980-81 season, where he remained until midway through the 1984-85 season when he was fired. Cheevers had led the Bruins to two first place and two second place finishes in their division and guided the team to the league's best record in 1982-83; where, in the playoffs the team fell to the eventual Stanley Cup champions, the New York Islanders, in the semifinals. His coaching record was 204 wins, 126 losses and 46 ties in 376 games.

Gerry Cheevers was inducted into the Hockey Hall of Fame in 1985.

Gerry Cheevers was inducted into the Rochester Americans Hall of Fame in 1987.

Gerry Cheevers was inducted as an inaugural member into the World Hockey Association Hall of Fame in 2010.