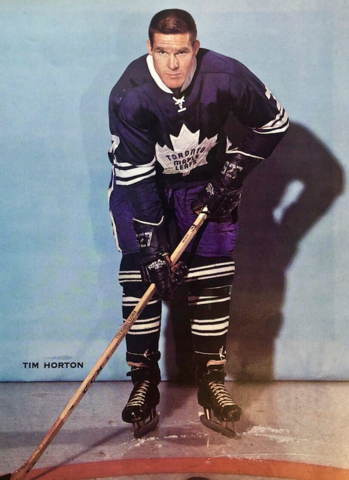 For most people today, the name Tim Horton means coffee & doughnuts at the fast-food franchise he co-founded in 1964. The chain's first doughnut store opened on May 17, 1964, in Hamilton, Ontario, under the name "Tim Horton Donuts". The name was later abbreviated to "Tim Horton's" and then changed to "Tim Hortons".

Gordie Howe (Mr. Hockey), tough in his own right, once said about Horton "the strongest player in Hockey." and Bobby Hull declared, "There were defencemen you had to fear because they were vicious and would slam you into the boards from behind, for one, Eddie Shore. But you respected Tim Horton because he didn't need that type of intimidation. He used his tremendous strength and talent to keep you in check."

Horton made his NHL debut with the Toronto Maple Leafs on March 26, 1950 vs the New York Rangers at Madison Square Garden in a 5-3 Rangers win. Horton did get a 2 minute roughing penalty.

Horton was killed after losing control of his De Tomaso Pantera sports car on the Queen Elizabeth Way in St. Catharines, Ontario, in the early morning of February 21, 1974. He had played a game in Toronto the previous evening against his former team, the Maple Leafs, and was driving alone back to Buffalo, 100 mi (160 km) south. In 2005, Horton's autopsy was made public and revealed that Horton's blood alcohol level was twice the legal limit, and that a half-filled vodka bottle was amongst the crash debris.

Tim Horton was inducted (posthumously) into the Hockey Hall of Fame in 1977.

Tim Horton was inducted (posthumously) into the Buffalo Sabres Hall of Fame in 1982.

While playing for the Maple Leafs, Horton wore the number 7, the same number worn by King Clancy from 1930 to 1937. The team declared both Horton and Clancy honoured players at a ceremony on November 21, 1995, but did not retire the number 7 from team use; despite this, it became an honoured jersey number, abiding by Leafs honours policy. In 2016, the Maple Leafs changed their retirement policy and, on October 15, retired the number 7 in honour of both Horton and Clancy.

In January 2017, Horton was part of the first group of players to be named one of the "100 Greatest NHL Players in history"