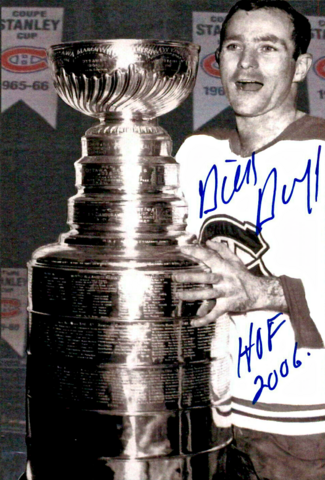 On March 10, 1955, Duff made his NHL Debut with the Toronto Maple Leafs in a scoreless tie vs Montreal Canadiens at The Forum. "The Maple Leafs would say, 'Put this guy with the pros. He's ready; he's strong enough, he's mentally strong enough and our team can absorb him now.'" He played 3 games for Toronto that spring.

Having earned the opportunity to play with the Maple Leafs, Duff surrendered his final season of junior eligibility and signed with Toronto at the age of 19. He scored his 1st NHL goal vs Jacques Plante of the Montreal Canadiens on October 26, 1955 at 16:25 of the 2nd period at Maple Leaf Gardens in a 2-1 Toronto win. Duff scored both the goals for the Maple Leafs, his second goal the game winner.

"I was playing on the first line that year. (Linemate) Tod Sloan got 37 goals and I got 18 goals and 37 points with 74 minutes in penalties. Dick was one of the central figures as the Maple Leafs re-built the team through the late-fifties, enjoying three consecutive seasons with 25 or more goals for Toronto between 1957 and 1959. The Maple Leafs made the playoffs his first season but missed out on post-season play in 1956-57 and 1957-58.

Duff, now a assistant captain, played a pivotal role in the Stanley Cup championship won by the Toronto Maple Leafs in 1962. Although he missed more than a quarter of the regular season suffering from a broken ankle, Dick scored the Stanley Cup-winning goal on April 22, 1962, as Toronto edged Chicago 2-1 to win their first Stanley Cup since Bill Barilko and his teammates celebrated in 1951.

The Maple Leafs repeated their Stanley Cup championship in 1963, with Duff setting an NHL record that still stands by scoring two goals in the first 1:08 of Game One of the final on April 9, 1963. Duff scored at the 49-second mark and again 19 seconds later. Toronto would beat the visiting Red Wings 4-2.

Too small to be considered a power forward, Duff still managed to play like one. The 5-foot-9, 165-pound left winger did everything expected of bigger forwards. He battled for the puck, carried it through traffic and staked a claim to his spot in front of the enemy net. Montreal coach Toe Blake had seen this in his playing style while in Toronto and said, 'Dick, I'm going to get you to play with Béliveau. Just watch near the blue-line. He's got the big long reach so don't be going offside."'

Having the chance to play for Montreal revitalized Duff's spirit and his play. With the Canadiens, Duff quickly became a fan favorite and an essential component of the Canadiens team that won the Stanley Cup in the spring of 1965, picking up nine playoff points along the way. He assisted on Béliveau's Stanley Cup winning goal.

Duff had a strong season in 1965-66, scoring 21 goals, 24 assists, then in the Stanley Cup finals he had 2 assists including on game winner of pivotal game four to tie the series (2-2), 1 goal, 1 assist in game five and then Montreal took the 1968 Stanley Cup championship in OT of game six.

Long recognized as one of the NHL’s most dogged competitors, Duff took his game to another level when the stakes were raised. Among his 25 goals in 1967-68 season, 8 were a team-leading game winners. In the finals, he set up Bobby Rousseau for the game three OT winner and also got a goal in game four, as Montreal swept St. Louis 4-0 for the Stanley Cup championship.

In the spring of 1969, he enjoyed the best postseason of his lengthy career. Playing with the abandon of a youngster, he scored a team-leading six playoff goals and finished with 14 points, second only to team captain Jean Béliveau. In the finals, Duff scored in three of the championships games, including 2 goals, 1 assist in game 3. He had a point in every game.

"It's the only regret I have," he said. "I was at Henri's house a couple of times after we won the Cup and his little guys were there and I would have liked to have expressed to his kids what their father meant to me and to the team. Henri Richard was small but he had the heart of a lion."

Duff Scored 283 goals and 289 assists for 572 points through 1,030 NHL regular season contests, and scored 30 goals and assisted on 49 in 114 playoff games. Maple Leafs coach Punch Imlach once said that Duff was "probably the best playoff player I ever coached."

Dick Duff was inducted into the Hockey Hall of Fame in 2006.