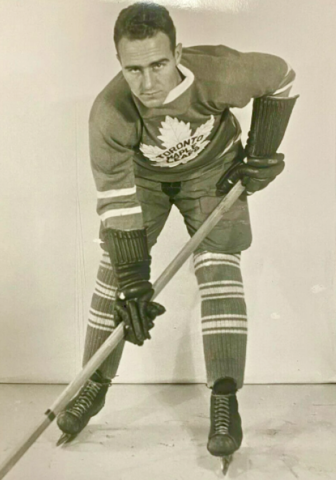 Kelly played all his early Hockey in his hometown, and while playing junior Hockey for the North Bay Trappers was noticed by scouts for his scoring ability. He was soon signed by the Newmarket Redmen (Newmarket Reds), and would lead them to the 1933 J. Ross Robertson Cup, as OHA champions and then the 1933 Memorial Cup Championship, scoring the game winner in game 1 of best of 3. Newmarket would win the championship in triple overtime in game 2 at Maple Leaf Gardens.

The Toronto Maple Leafs management had taken notice of Kelly now, and instigated a trade, sending Kelly from Newmarket to the Toronto St. Michael's Majors, the junior farm team of the Maple Leafs.

Kelly had a strong season with the St. Michael's Majors, but once again he was a force in the playoffs, scoring 23 goals in 16 games, winning the 1934 J. Ross Robertson Cup, and then another game 1 winner in the Memorial Cup final, and 2 goals in game 2 of best of 3 final, as the St. Michael's Majors won the 1934 Memorial Cup championship in overtime.

Kelly then joined the Toronto Maple Leafs for the start of the 1934-25 season, scoring 11 goals as a rookie and added eight assists in 47 games. Kelly scored his 1st NHL goal on Christmas Day (1934) at the Montreal Forum vs Wilf Cude of the Montreal Canadiens. The Maple Leafs would reach the Stanley Cup final during his first NHL season.

Kelly played 3 season with the Maple Leafs before being loaned to the Chicago Black Hawks in 1937 for 29 games to finish the 1936-37 season. Kelly then returned to the Maple Leafs to start the 1937-38 season, and remained in Toronto until season's end in 1940, when he was sold back to the Black Hawks for cash.

Kelly was a busy guy in the 1941-42 season, playing for the NHL Brooklyn Americans, AHL Springfield Indians and the Buffalo Bisons.