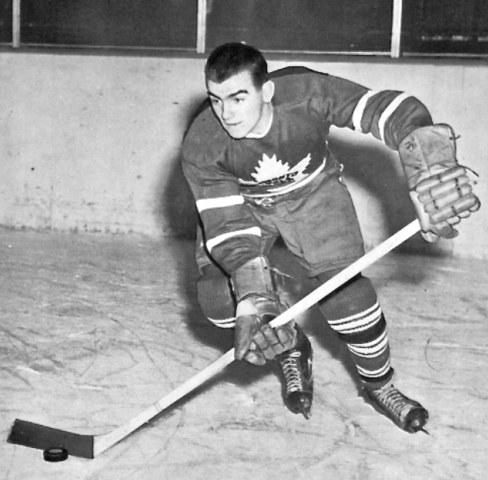 Sloan was signed by the Maple Leafs on April 30, 1946, and turned pro with the Pittsburgh Hornets of the American Hockey League / AHL for the 1946-47 season. He scored 15 goals (24 assists) in his first pro season, and helped the Hornets reach the 1947 Calder Cup finals, losing to the Hershey Bears in 7 games.

Sloan played another season in Pittsburgh, scoring 20 goals (24 assists) and getting called up to the Toronto Maple Leafs for one game, making his NHL debut on Christmas Day 1947 vs the Montreal Canadiens at The Forum.

Sloan would play 29 games for the Maple Leafs during the 1948-49 season, scoring his 1st NHL goal on January 15, 1949 vs Chuck Rayner of the New York Rangers at 14:34 of the 2nd period. It was the game winner 2-1. The Maple Leafs would go on to win the 1949 Stanley Cup. Sloan did not play for them in the playoffs, but was part of their championship team picture, and did not get his name on the Stanley Cup that season.

Sloan played the 1949-50 season with the AHL Cleveland Barons, scoring 27 goals (39 assists) in the regular season, and scored 10 goals (4 assists) in the playoffs, helping the Barons reach the 1950 Calder Cup finals, losing to the Indianapolis Capitals.

Sloan would become a regular with the Maple Leafs the next season 1950-51, and play for them the next 8 seasons.

Sloan centered a line with Ted Kennedy and Sid Smith, scoring 31 goals (25 assists) during his first full season as a Maple Leaf. That line scored 10 of Toronto's 13 goals in the five game 1951 Stanley Cup Final against the Montreal Canadiens, with Sloan's seven points leading the team. It's also the only Stanley Cup Final that had each game go to overtime. Sloan scored and assisted on 2, including the game 1 winner, assisted on tying goal in 3rd period of game 2, assisted on game winner in game 3, scored 2 times in game 5, including the tying goal at 19:28 of the 3rd to send the game to overtime, in which Bill Barilko scored the famous 1951 Stanley Cup winning goal.

Sloan was voted as the 1956 J. P. Bickell Memorial Award winner, and soon after, the Maple Leafs sold him to the Chicago Black Hawks in June, 1956. Sloan and teammate Jimmy Thomson were sent from Toronto to Chicago because of their activities in organizing the National Hockey League Players' Association, something Conn Smythe was against.

Sloan fit right into the Black Hawks lineup, and his leadership plus experience was a boon to Chicago and it's young players. The Black Hawks had been mostly cellar dwellers before Sloan got there, and during his first season in Chicago, the Black Hawks finished 3rd in the league, and took Montreal to 6 games in the playoffs before losing to the eventual Stanley Cup champs that year.

Sloan reached a milestone while playing for the Black Hawks in his second season there, as he scored his 200th NHL goal on December 23, 1958 vs Marcel Paille of the New York Rangers at Madison Square Garden.

Sloan played one more season in the NHL, scoring 20 goals (20 assists) during the regular season. In the playoffs, facing Montreal, who had eliminated Chicago the last 2 playoff series. Sloan had a goal in the first game and Chicago would win the series in 6 games.

The Black Hawks would play the Red Wings in the Stanley Cup final, a series that would go 6 games. Sloan stepped up in the final game, played at Olympia Stadium, having 2 penalties in the game and 1 assist on the Black Hawks 3rd goal in a 5-1 victory and the 1961 Stanley Cup championship.

Sloan only made the NHL All-Star team once in 1956, mainly because when he played right wing, he was behind a couple of guys named Howe and Richard.

Sloan would retire from professional Hockey in the off season, and was reinstated as an amateur, joining the Galt Terriers, a OHA senior team. Sloan and Galt helped Canada win the silver medal at the 1962 World Championship with Sloan scoring 6 goals (4 assists) in six games.