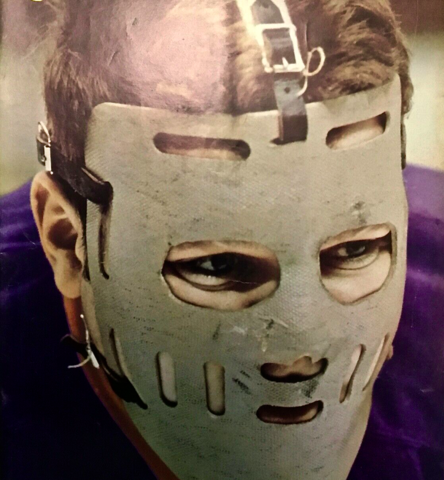 Desjardins made his NHL debut with the Los Angeles Kings on October 13, 1968 vs Oakland Seals at Oakland–Alameda County Coliseum Arena in a 4-4 tie.

Desjardins helped the Buffalo Sabres win their 1st Prince of Wales Trophy in 1975 as NHL Wales Conference regular season champions. They lost in the 6th game of the 1975 Stanley Cup finals to the Broad Street Bullies.....Philadelphia Flyers.

Desjardins' career ended after a puck struck his eye on November 19, 1977, in a game vs Washington Capitols.

This led many NHL goalies to switch from fibreglass facemasks toward the cage and helmet style.

NOTE
If you look close at the mask in this photo, you can see the rough cutouts for the eyes and a chip on the nose area. The mask is quite tight to the face too.