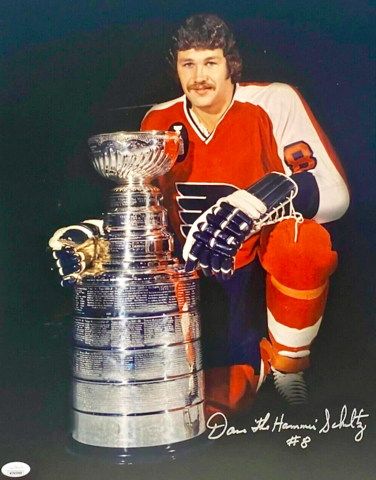 Schultz made his NHL debut on January 20, 1972 vs Chicago Black Hawks at The Spectrum in a 3-2 Flyers win.

Schultz’s reputation as a fighter also produced “The Schultz Rule”, which prohibits NHL players from using boxing wraps, or any other foreign object, for protection during fights.

Schultz recorded a song entitled “The Penalty Box” in 1977.

Schultz co-authored a book entitled The Hammer with Stan Fischler in 1981 that provides insights into the world of a professional ice Hockey enforcer.

Dave Schultz was inducted into Flyers Hall of Fame on November 16, 2009