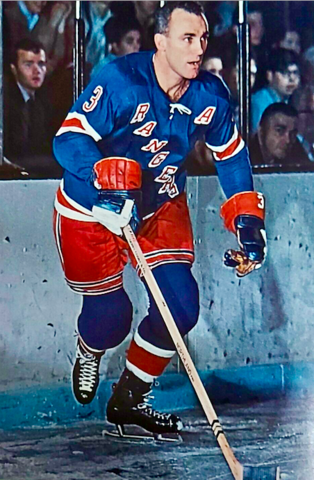 Howell made his NHL debut with the New York Rangers on October 18, 1952 vs Toronto Maple Leafs. He also scored his 1st NHL goal vs Harry Lumley a PPG at 5:21 of the 2nd period at Maple Leaf Gardens in a 4-3 Toronto win.

Howell would become a legend in New York, playing for the Rangers until 1969 (17 seasons), establishing a record 1160 games played. He captained the Rangers from 1955 to 1957, giving up the C as he believed he played poorly while being captain.

Howell was awarded the James Norris Memorial Trophy in 1967, and then quoted that he was glad he won the trophy then, because Bobby Orr (who finished second that year) would "own" the Norris for some time to come; Orr would win the trophy for the next eight seasons.

Howell's #3 was retired by the New York Rangers during a special ceremony on February 22, 2009.

In 1969 Howell was offered a front-office position with the Rangers if he retired, but he was interested in still playing, so was sold to the Oakland Seals. He played another eight years in professional Hockey; two with Oakland/California Seals, three with the Los Angeles Kings, and one each with three World Hockey Association / WHA teams: New York Golden Blades/Jersey Knights (1973–74), San Diego Mariners (1974–75), and ending his playing career with the Calgary Cowboys (1975–76).

Harry Howell was inducted into the Hockey Hall of Fame in 1979.