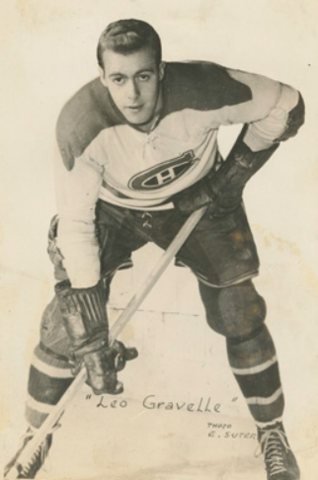 In 1943, Gravelle joined the Brantford Lions for 1 season, as he got recruited to play for the Toronto St. Michael's Majors (St. Mike's) for the 1944-45 season, and quickly became the top scorer on the team and leading the Ontario Hockey Association / OHA in goals. Gravelle then had a outstanding playoff run, helping the St. Michael's Majors win the 1945 J. Ross Robertson Cup as OHA champions, the 1945 George Richardson Memorial Trophy as Eastern Canada champions, then Gravelle would score the 1945 Memorial Cup winning goal vs the Moose Jaw Canucks in game 5 at Maple Leaf Gardens.

Gravelle then played the next season for the Montreal Royals in the Quebec Senior Hockey League / QSHL, helping the Royals to 1st place in the regular season, and then leading the Royals to the 1946 QSHL championship, scoring 10 goals in 11 playoff games.

Gravelle then made his NHL debut with the Montreal Canadiens early in the 1946-47 season, and would play in 53 regular season games, scoring 16 goals, 14 assists as a NHL rookie, and another 2 goals in 6 playoff games, helping the Canadiens reach the 1947 Stanley Cup finals.

Nicknamed “The Gazelle”, Gravelle’s speed made veteran Montreal observers recall the immortal Howie Morenz – some even hailing the 21-year-old (Gravelle) as the fastest man to ever play in the NHL.

Gravelle had a slow start for the 1947-48 NHL season, and was sent down to the minors, first with the AHL Buffalo Bisons for 29 games, and then to the Houston Huskies of the United States Hockey League / USHL. Canadiens legend Toe Blake had taken over the coaching duties of the Huskies, and wanted Gravelle on the team to finish the season. And what a season finish it would be for Gravelle and the Huskies, as Léo scored 14 goals, 15 assists to finish the regular season, and then another 4 goals, 3 assists in the playoffs, helping the Huskies win the Paul W. Loudon Trophy as 1948 USHL champions.

Gravelle was back in the NHL the next season, and would split the 1948-49 season between Montreal and the AHL Buffalo Bisons.

Gravelle then played a full 70 game NHL schedule for the first time in the 1949-50 season, with Gravelle skating alongside Billy Reay and fellow Ottawa-area native, Howard Riopelle on the team’s second line. Responding to the vote of confidence, Gravelle scored 19 times, tying for second spot among Canadiens forwards with linemate Reay. Riopelle, the defensive specialist on the trio, scored a 12 of his own.

Gravelle was traded the next season to the Detroit Red Wings by for Bert Olmstead, December 19, 1950, but would score just 1 goal in 18 games, and would be sent down to the AHL Indianapolis Capitols to finish the season.

Geavelle was then traded to the Ottawa Senators of the Quebec Quebec Senior Hockey League (Major) / QSHL by Detroit for cash, September 5, 1951, and would become a scoring star in the league.
Gravelle scored a league high 45 goals in the 1953-54 season, helping the Senators reach the 1954 league championship finals (now the Quebec Hockey League), and was voted to the QHL First All-Star Team for 1954.