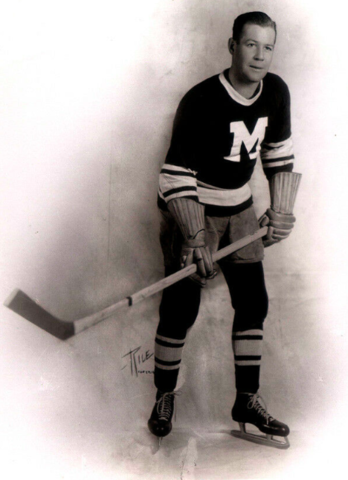 Robinson then played for the Montreal Victorias during the 1926-27 season, and then turned pro for the 1927-28 season with the Philadelphia Arrows in the Canadian-American Hockey League / Can-Am, scoring 18 goals, 7 assists during the season.

His scoring ability caught the attention of the Montreal Maroons, who signed him for the 1928-29 season. Robinson played most of the next season with the Maroons too, but was sent to their farm team in the International Hockey League / IHL, the Windsor Bulldogs for 5 games.

Robinson would play the 1930-31 season with the Bulldogs, and led the IAHL in scoring with 44 goals (63 points) in 48 regular season games, and then led the Bulldogs in scoring during the playoffs with 6 goals, 4 assists, helping Windsor win the 1931 F. G. Teddy Oke Trophy as playoff champions of the International-American Hockey League / IAHL.

The Maroons then brought Earl back to Montreal for half a season before returning him to the Bulldogs to close out the 1931-32 season, where he helped the Bulldogs to the IAHL playoff finals.

Robinson finally secured a regular spot on the Maroons' roster for the 1932-33 season. From then on, he became a solid performer who could be counted on for steady offensive production. All of his efforts reached a peak at the close of the 1934-35 season when the Maroons won the 1935 Stanley Cup championship, with a 3 game sweep of Toronto. Robinson had 1 goal and assisted on the game winner in overtime in game one, and 1 goal in game two.

Robinson remained with the Maroons for an additional three seasons before being traded to the Chicago Black Hawks with Russ Blinco and Baldy Northcott for $30,000, September 15, 1938.

The following year, he was sold to the Montreal Canadiens on October 11, 1939 where he played his last 11 NHL games before sent to the New Haven Eagles of the IAHL to finish the season.

The IAHL became the American Hockey League / AHL for the 1940-41 season, and Robinson played for the Eagles until 1942.