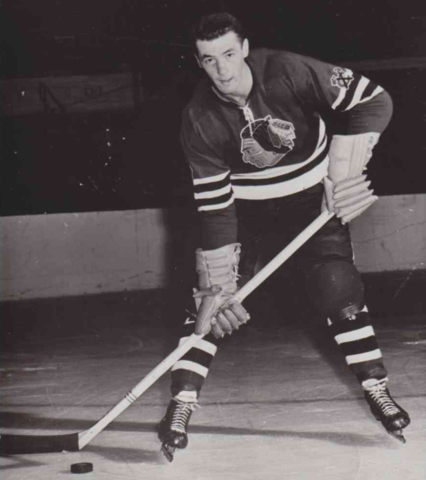 Litzenberger played his minor Hockey in Weyburn, Saskatchewan and joined the Regina Pats, where he played his junior Hockey from 1949 to 1952, scoring 332 points in 197 regular season and play-off games for an outstanding 1.69 points per game.

Litzenberger served as captain of the Pats in 1950-51 and 1951-52 and made the Western Junior League All-Star team in the same years, while also leading his team into the Memorial Cup playoffs in 1950, 1951 and 1952. Litzenberger also led the league with 44 goals in 40 games in the 1950-51 season, and was the leading point producer in the playoffs.

Litzenberger was invited to the Montreal Canadiens training camp in 1952, although he certainly did not plan on a NHL career.

"I was supposed to be an engineer," he told Frank Pagnucco in the book Heroes: Stars of Hockey's Golden Era. "I went down to the University of Colorado and registered. Then I went to the Montreal training camp and they offered me a contract and I kind of forsook my college degree."

In 1952-53, Litzenberger played a pair of games for the Canadiens but spent most of his first two years as a pro with the Montreal Royals of the Quebec League. In 1953, he was presented the William Northey trophy as the league's top rookie after a 26-goal performance and was placed on the second all-star team in 1954.

The talented forward began the 1954-55 season in Montreal but the club had too many good players. In December, he was traded to the Chicago Black Hawks for cash. "I cried real tears," said Litzenberger of the trade to Chicago. The night before he had scored the game winning goal for Montreal, and then his world was turned upside down. "You become a little bit of an instrument but I look back with affection. It gave me a chance to learn what (life) was all about." Litzenbeger blossomed with the increased ice time and scored 40 points in the last 40 games of the season. Chicago missed the playoffs, but their new addition was named the 1955 Calder Trophy winner as top rookie - becoming one of only two players (Carl Voss being the other) to win the Calder Trophy while playing for two different teams in the season.

By the late 1950s Litzenberger was one of the league's most reliable scorers. He notched three straight seasons with 32 goals or more, and was named to the NHL second all-star team in 1957. He often formed a solid line with Bobby Hull and Lorne Ferguson, and he was named Captain of the Chicago Black Hawks in 1958.

During the 1959-60 season, Litzenberger was involved in a tragic automobile accident. “We were coming home after a game in Chicago Stadium,” Liztenberger said. “My wife was driving, and the road was slippery. We hit a viaduct, and the next thing I know I was in the emergency room of the hospital.” He was badly injured in the accident. “I had a couple cracked ribs, contusions of the liver, and a bad concussion. I was in shock for seven days and couldn’t remember a thing.”

Worse than that, his wife perished in the accident. Litzenberger said, “When I realized what had happened, my morale was shot. I wanted to quit Hockey.”

Litzenberger was not the same player on the ice after that. After putting up 12 goals and 18 assists during that season, he only managed a 10 goal and 22 assist season the next year, but still led a Black Hawks team consisting future Hall of Famers Bobby Hull, Stan Mikita, Pierre Pilote and Glenn Hall to a Stanley Cup championship in 1960–61. This was the first Stanley Cup the Black Hawks had won since 1937–38.

“She’s one of the big reasons I was able to get back to myself,” Litzenberger said of Gale, his new wife. “That and the trade have made me a different man.”

However, his name was left off the Stanley Cup after the 1963-64 season, since he spent most of the season in the minors with the Rochester Americans. After the 1963-64 season, he was sent to the Rochester full time. He was part of a team that won 2 consecutive Calder Cups in 1965 and 1966. Litzenberger also played 23 games for the WHL Victoria Maple Leafs during the 1965-66 season.

Litzenberger is also the only player in North American Hockey history to win six straight pro Hockey championships by winning the Stanley Cup in 1961, 1962, 1963 and 1964, and the Calder Cup in 1965 and 1966. NOTE : Al Arbour was also on these teams, but is not recognized on the 1963 Stanley Cup.

Edward “Eddie” Litzenberger was installed in the Saskatchewan Sports Hall of Fame on June 15, 2002