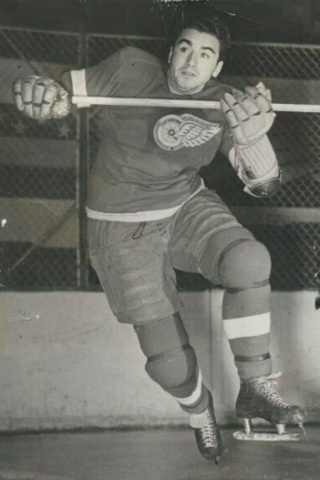 Orlando became known as the "Italian Kid" that liked fine clothes, but could also speak Italian, French and English fluently.

Orlando turned pro with the Rochester Cardinals of the International Hockey League / IHL, playing just 12 games before returning to the MCHL with the Montreal Sr. Canadiens to finish the 1935-36 season, and led the league in penalty minutes with 49, along with scoring 1 goal, 6 assists.

The Detroit Red Wings signed Orlando for the 1936-37 season, and he played in 9 NHL regular season games, but finished the season with their affiliate, the Pittsburgh Hornets of the International-American Hockey League / IAHL. Detroit won the 1937 Stanley Cup championship, but still included his name on the Stanley Cup even though he did not qualify.

Orlando was traded to the Springfield Indians of the IAHL by Detroit for cash, September 27, 1938, and he would play the 1938-39 season in Springfield, leading the league in penalty minutes with 106. Orlando was also name to the 1939 IAHL Second All-Star Team.

Springfield sold Orlando back to the Red Wings for cash, October, 1939. Detroit liked his tough style of play, and he would be known as a enforcer "Little Caesar" for the Red Wings for the next four seasons. In his first full season in Detroit, Orlando scored his first NHL goal, along with 3 assists and 54 penalty minutes.

In the 1940-41 season, Orlando scored 1 goal again, and 10 assists with 99 penalty minutes, then 2 assists in the playoffs, with 31 penalty minutes, as the Red Wings reached the Stanley Cup finals.

In the 1941-42 season, Orlando had a NHL career high 111 penalty minutes, with 1 goal, 7 assists, and another 45 penalty minutes with 4 assists during the playoffs, as the Red Wings again reached the Stanley Cup finals.

The 1942-43 season would be the final year for Orlando in the NHL, and he had a career high 3 goals, with 4 assists and 99 penalty minutes during the regular season. In the playoffs, Orlando had 3 assists and only 14 penalty minutes, as Detroit won the 1943 Stanley Cup championship.

When Jimmy, then known as "the bad man on ice," was arrested by the FBI and charged in 1944. He was convicted of draft evasion and falsifying documents suggesting he held an essential war job and therefore was exempt from military service.,After being bailed out by the Red Wings president, he promptly jumped bail, returning to Canada, saying he was visiting a sick mother. He then joined the Canadian Army but was thereafter a wanted man in the U.S.A., effectively ending his NHL career.

Orlando then played in the Quebec Senior Hockey League / QSHL with the Valleyfield Braves, Ottawa Senators and Montreal Royals from 1945 to 1951. He was voted to the 1948 and 1949 QSHL First All-Star Team.

In his final playing season, the Braves won the 1951 QSHL championship and the 1951 Alexander Cup championship.

Orlando also managed the famous El Morocco night club in Montreal, becoming a notorious playboy and ladies man. He met the famous Stripteuse Lili St. Cyr in 1946, and the two would have a affair that lasted for years.

Orlando was later described by legendary Montreal sports writer Mike Farber, as being the spectator who rushed to the aid of NHL Hockey commissioner Clarence Campbell when attacked at the Montreal Forum at the start of the 1955 Richard Riot. Orlando was described as having knocked the assailant's teeth out "like Chicklets."

Orlando went on to own Aldo's nightclub, a night spot which was a favorite hangouts for Montreal's many jazz musicians & gangsters. Jimmy also refereed big-time wrestling matches at the Montreal Forum and remained a much beloved celebrity in Montreal until his death.