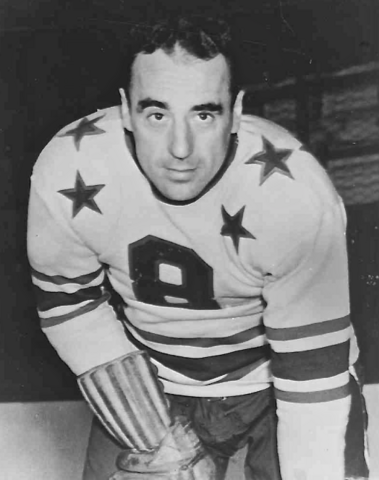 Trudel, born to Canadian parents, moved to Edmonton, Alberta at a young age, learning his Hockey there.

Trudel played junior Hockey with the Edmonton Poolers. from 1929-32, and turned pro with the St. Paul Greyhounds / Tulsa Oilers in the American Hockey Association / AHA for the 1932-33 season. He scored 10 goals, 6 assists in 31 games.

Trudel signed with the Chicago Black Hawks and made his NHL debut on November 9, 1933 vs New York Americans at Chicago Stadium in a 2-2 OT tie as a defenceman. He scored his 1st NHL goal vs George Hainsworth of the Toronto Maple Leafs on March 15, 1934 at 17:25 of the 2nd period at Maple Leaf Gardens in a 2-1 Chicago win. He played in 34 games, and 8 playoff games, helping the Black Hawks win their first Stanley Cup in 1934.

In the 1934-35 season, Trudel was moved back to left wing and scored 12 goals, 10 assists and formed an efficient line with Bill Kendall and Tom Cook. He was a regular with the Black Hawks through the 1937-38 season, and helped Chicago win the 1938 Stanley Cup championship. He had 3 assists, including 1 in the final game. Interesting note.....the NHL (Frank Calder), had shipped the Stanley Cup to Toronto for game 5 as they didn't think Chicago would win game 4, so the Black Hawks did not have the Stanley Cup to celebrate with at Chicago Stadium where they won the championship on April 12, 1938.

Trudel was then traded to Montreal Canadiens by Chicago for Joffre Desilets, August 26, 1938.

Trudel played for Montreal the next 3 seasons, while also playing for their farm team, the New Haven Eagles in the International American Hockey League / IAHL (AHL). He played his final NHL game on February 9, 1941 and finished the season in New Haven.

Trudel played the 1941-42 AHL season with the Washington Lions, and was then traded to the Cleveland Barons, where he helped them win the Calder Cup championship in 1945, while also reaching the Calder Cup finals in 1944 and 1946.

After playing a few games for the Montreal Royals in the Quebec Senior Hockey League in 1948-49, Trudel joined the Cleveland Knights in the Eastern Hockey League EHL as a player coach for the 1949-50 season, then joined the Grand Rapids Rockets of the International Hockey League / IHL as a player-coach from 1950 to 1952. He became a full time coach for the Rockets in 1952-53, and then finished his career coaching the Milwaukee Chiefs in 1953-54, also appearing in 11 games for them, with 1 goal, 6 assists.