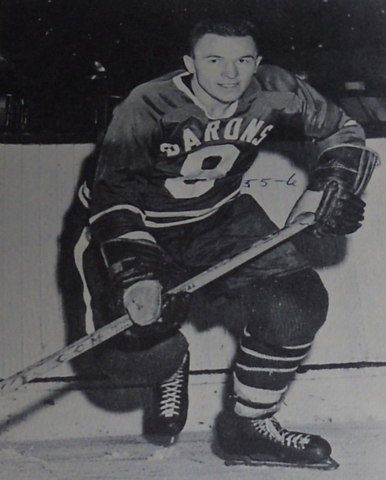 While Canada has produced many talented athletes, few can match Ike Hildebrand's claim to fame. He achieved national and international success in both Canada's national winter sport (Hockey) and national summer sport (lacrosse) in a career that spanned more than 16 years. A native of Winnipeg, Hildebrand first rose to National sporting prominence in the Mann Cup, the Canadian senior lacrosse championship that annually pits the winners of the Western and Ontario Lacrosse Associations against one another to determine the national champion. He was a member of the 1943 Mann Cup-champion New Westminster Salmonbellies as a 15-year-old. A year later, he became the youngest-ever recipient of the Mike Kelly Award as Mann Cup MVP. Before leaving B.C., he was twice led the league in scoring, in 1946 and 1948.

Hildebrand played his first junior Hockey for the Northwest Industrial Hockey League / NIHL Isaacson Ironmen (Seattle Ironmen). Seattle then joined the Pacific Coast Hockey League / PCHL to start the 1944-45 season, and would go on to win the league championship (President's Cup) that season, and then play the Boston Olympics for the 1945 US Amateur Hockey Association championship, where they defeated the Olympics 4 games to 2, and outscored them 45-24 in the six games.

Hildebrand then moved to Ontario, and would be signed to play with the Oshawa Generals of the Ontario Hockey Association / OHA. Hildebrand was on fire in the 1946 OHA playoffs, scoring 21 goals and 11 assists in 12 games, leading the Generals deep into the playoffs, eventually losing to the St. Michael's Majors, who would go onto the Memorial Cup championship series. Hildebrand played for the Generals during the next season too, scoring 28 goals and 25 assists in 29 games.

Hildebrand finished his junior career with the OHA Toronto Marlboros in the 1947-48 season, scoring 29 goals and 37 assists in 35 games.

The Toronto Maple Leafs owner wanted Hildebrand to sign with the Maple Leafs.

"Major Conn Smythe called me into his office and here's the deal he offered me -- $1,000 up front, $3,000 a year if I played in the minors at Tulsa, $4,000 if I went to Pittsburgh, and $5,000 if the Maple Leafs kept me," Hildebrand once told Toronto Star columnist Jim Proudfoot. "I told him I'd have to talk it over with my mom and dad."
Smythe and Hildebrand could not reach a deal, so Hildebrand then turned pro, and returned to the West Coast in the to play for the PCHL Los Angeles Monarchs, becoming one of the top scorers on the team, and helping the Monarchs reach the 1950 championship finals vs the the New Westminster Royals. In his 2 seasons in Los Angeles, Hildebrand scored 41 goals, 55 assists in 108 regular season games, and 7 goals, 13 assists in 24 playoff games.

Hildebrand jumped leagues to start the 1950-51 season, playing for the Kansas City Royals of the United States Hockey League / USHL, and had a great season there, scoring 42 goals, 49 assists in 63 games, and being named to the USHL First All-Star Team.

The American Hockey League / AHL Cleveland Barons then signed Hildebrand, and he won a Calder Cup championship with the Barons in the 1952-53 season and earned a berth at right wing on the league's First All-Star Team. He led all goal scorers that season with 38 and 34 assists, but only one goal and one assist in 11 playoff games.

Hildebrand finally broke into the National Hockey League / NHL when the New York Rangers signed him in 1953, and put him on a line with Don (Bones) Raleigh and Nick Mickoski, a fellow Winnipegger. He scored two goals and added three assists in his first five games. Rangers coach Frank Boucher juggled lines, placing Mr. Hildebrand with rookie winger Billy Dea and centre Max Bentley. The goals stopped coming and the Rangers sold him to the minor-league Western Hockey League / WHL Vancouver Canucks on January 7, 1954, where he played 8 games and had 0 points. The Canucks then sold Hildebrand to the NHL Chicago Black Hawks on January 20, 1954, where he finished the season, scoring just 1 goal, 4 assists in 7 games, as his season came to a sudden end after he broke a leg during a game in Toronto in February.

Hildebrand finished his pro Hockey career with the AHL Cleveland Barons during the 1955-56 season.

Hildebrand returned to senior Hockey in 1956, first with the Pembroke Lumber Kings and then Belleville. It was while with the Belleville McFarlands that Hildebrand achieved his greatest successes as a both a Hockey player and coach. The 1958 McFarlands defeated the Kitchener-Waterloo Dutchmen to win the O.H.A. Senior “A” Title. They went on to defeat South Porcupine for the All-Ontario Championship and Levis, Quebec for the Eastern Canada Title. Down three games to one against the Kelowna Packers in Kelowna, they rebounded to win the next three games to capture the (50th anniversary) Allan Cup as Senior Canadian Champions, and earning the right to represent Canada at the World Hockey championships the next season. At the 1959 World tournament in Czechoslovakia, Hildebrand both played for and coached the McFarlands. In fact, he scored during the game in the 3-1 victory over the Soviet Union that helped to clinch the world championship for Canada. Hildebrand scored 6 goals and 6 assists in 8 games for Canada. The McFarlands had played a grueling exhibition series across Europe that left them tired and banged up even before the World tournament began. Still, they emerged victorious.

Hildebrand played 1 more season with the Belleville McFarlands, before hanging up his skates for competitive Hockey.

After his playing days, Hildebrand turned to coaching with the London Nationals, Orillia Terriers and two years with the Oshawa Generals during the 1960s.

Ike Hildebrand was inducted into Canada's Lacrosse Hall of Fame in 1972 and Canada's Sports Hall of Fame for lacrosse in 1985. Hildebrand would score more than 900 goals and 700 assists in his lacrosse career, which saw him play in five Mann Cup series. He was named to league all-star teams 13 times in 15 seasons. He won scoring titles in 1946, 1948, 1954 and 1955, the last two coming while playing for the Peterborough Timbermen.

Ike Hildebrand was inducted into the Oshawa Sports Hall of Fame (multi-sports) in 1993.

Ike was also an ardent golfer and has two holes-in-one to his credit.