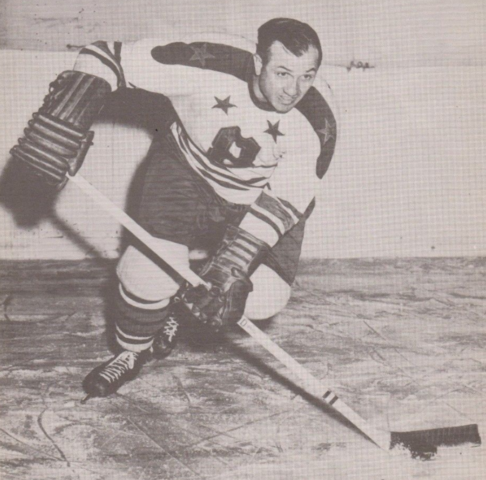 Douglas played his junior Hockey with the local Perth Juniors and the Perth Blue Wings until 1938, and also joined the Code Felt & Knitting Co. team of the local Industrial League in 1935-36 - his father was superintendent of the company.

Douglas then joined the Detroit Pontiac McLeans for the 1938-39 season, a senior amateur team of the Michigan-Ontario Hockey League, and was the league leading scoring during the season, and received a gold watch for his effort.

Douglas turned pro in 1939 with the Indianapolis Capitals of the International-American Hockey League / IAHL. The Capitals were a farm team for the Detroit Red Wings. The Capitals then joined the American Hockey League / AHL for the 1940-41 season, and Douglas got his 1st NHL games during the season, as the Red Wings called him up to play in 18 games, where he scored his first NHL goal.

Douglas was among the AHL team’s top scorers in 1940-41 and the 1941-42 season, playing the interim year primarily in Detroit. He set an AHL record for points in a playoff year, tallying 17 in 10 games to lead the Capitals to the 1942 Calder Cup championship, defeating the Hershey Bears in the finals.

Douglas split the 1942-43 season between the Capitals and the Red Wings, playing mostly for Detroit down the stretch, and helped the Red Wings with 3 goals and 2 assists in 10 playoff games, as the Red Wings were crowned 1943 Stanley Cup champions.

Douglas’ best years came after WWII, when he returned to the Capitals and had two high-scoring seasons. He led the AHL in scoring in 1945-46, with 44 goals, 46 assists and 90 points, as the Capitals won their third F. G. "Teddy" Oke Trophy as West Division champions.

The following year, he had 57 assists and 83 points and was a Second Team All-Star a year after being named to the First Team. He continued to be a productive scorer after leaving Indianapolis in the summer of 1947. Douglas was small, at 5-10, 158, but a big scorer.

Douglas joined the AHL Buffalo Bisons for 2 seasons - 1947 to 1949, before signing with the AHL Cleveland Barons. In Cleveland, Douglas won the Les Cunningham Award in 1950 as AHL MVP, Douglas picked up a $300 bonus. He won the Carl Liscombe Trophy (John B. Sollenberger Trophy), and picked up $300 as league scoring leader (100 points) and $300 for being selected to the first all-star team. In the 1950-51 season, Douglas scored 31 goals and 39 assists for the Barons, and then scored 3 goals, 4 assists in the playoffs, helping the Barons win the 1951 Calder Cup championship.

Douglas then joined the Montreal Royals of the Quebec Senior Hockey League / QSHL for the 1951-52 season, scoring 30 goals, 50 assists and lost the Quebec scoring title to Jean Beliveau on the latter's final game of the regular season.

Douglas played 1 more season for the Royals, before he settled in Kingston, Ontario around 1954, and continued playing Hockey through 1960 in a local industrial league.