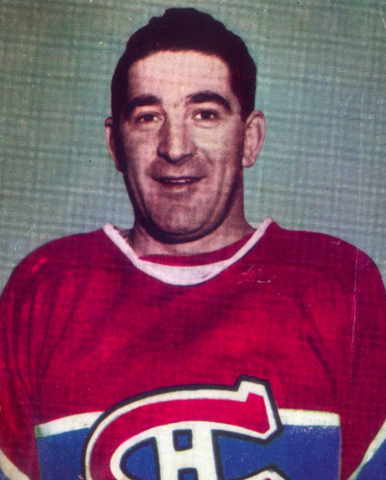 Léger learned to play Hockey at the parish of L'Annonciation with his 5 brothers as a youth. They played on a open air rink next to the church.

From 1939 to 1943, Léger played in Montreal with Dominion Glass, Hudson Height, Ottawa Highlanders was then a top scorer for the senior Hockey Joliette Cyclones of the Quebec Provincial Hockey League / QPHL.

Léger then signed as a free agent with the NHL New York Rangers, November 23, 1943. Léger would play only 7 games with the Rangers, scoring 1 goal, 2 assists, 3 games with their Madison Square Garden affiliate team, the New York Rovers and then traded to the Montreal Canadiens with the loan of Gord Davidson for Bob Dill, January 4, 1944.

The Canadiens were impressed with his play, and brought Léger up for most of the 1946-47 NHL season, where he helped Montreal reach the 1947 Stanley Cup finals with 6 assists in 11 playoff games.

Léger played most of the 1949-50 season in Montreal, while also playing 11 games for the AHL Cincinnati Mohawks.

Montreal traded Léger to the Victoria Cougars of the Pacific Coast Hockey League / PCHL for cash and named playing-coach, September 16, 1950.

Léger would have a outstanding first season with the Cougars, scoring 17 goals, 43 assists. He was voted to the 1951 PCHL First All-Star Team, and was the 1951 PCHL MVP. The Cougars were also 1951 Presidents Trophy winners (Lester Patrick Cup) as PCHL champions.

Léger would have another outstanding PCHL season, scoring 16 goals, 47 assists, while again being voted to the 1952 PCHL First All-Star Team. the Cougars would lose in the PCHL championship series.

Léger finished off his career with the QHL Shawinigan Cataractes, playing from 1954 to 1956.