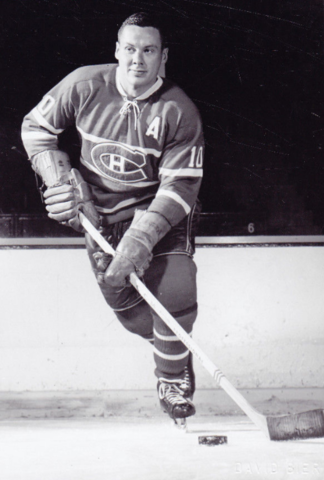 In his first year of junior with the Winnipeg Monarchs in 1946-47, Johnson was deemed to have too many rough edges to be worthy of a spot on the Toronto Maple Leafs' list of 18 sponsored players. Following a match in which he scored the tying and winning goal on end-to-end rushes, a Montreal Canadiens' scout worked out a cash settlement with the Maple Leafs and placed him on their negotiation list.

The first year Johnson came to Montreal, general manager Frank Selke was unable to gain a transfer from the Canadian Amateur Hockey Association. The young blueliner spent a year playing informal Hockey, taking a few classes at McGill University and spending valuable time around the Canadiens winning environment at the Forum. Beginning the next year, he made two brief appearances with the big club but spent the majority of his first three pro seasons refining his game with the Montreal Royals of the Quebec Senior Hockey League and then the Buffalo Bisons of the AHL. In the minors he impressed coaches both with his enthusiasm from the bench and his work ethic on the ice. He also improved his skating, which had always been his one major drawback.

Johnson stepped into a starting role with the Canadiens in 1950-1951 and impressed them with his eagerness and durability in playing all 70 regular-season games. He was, however, vulnerable to common rookie mistakes such as hasty decision-making and taking unwise penalties. Johnson soon became a stalwart on the penalty-killing unit, where the team utilized his speed and his ability to win the majority of the battles in the corners. One of Johnson's patented moves was to steal the puck from an attacking forward without bodily contact. This allowed him to feed a pass to one of his teammates while the opposition was still heading toward the Montreal net. Although Johnson rarely saw power-play duty, coach Dick Irvin often switched him to center if the Canadiens needed a goal late in the game. Johnson won his first Stanley Cup ring in 1953 when the Canadiens defeated Boston. He later played a vital role on the Canadiens squad that won the Stanley Cup an unprecedented five consecutive times from 1956 to 1960.