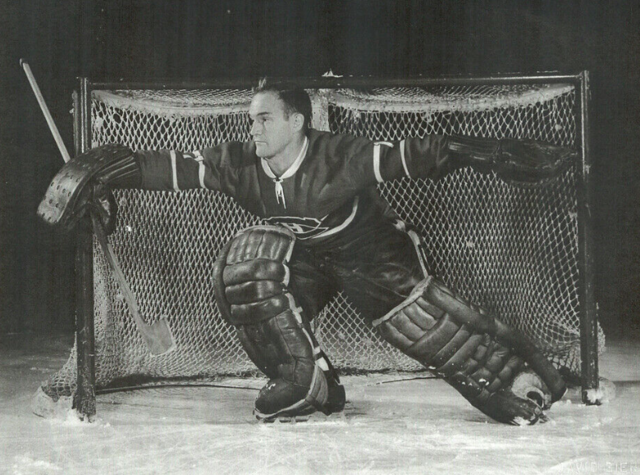 The Toronto Maple Leafs signed Durnan as a protected player, and sent him to Toronto to play with some of their minor league teams. Durnan played for the Toronto Torontos, Toronto British Consol and the Toronto All-Stars during the 1933-34 season.

Durnan then played the 1934-35 season with the Toronto McColl-Frontenacs, hurt his knee, and only played 1 game during the 1935-36 season for the Toronto Dominions. The Maple Leafs then released their rights to Durnan.

While Durnan played in Toronto, one of his coaches - Steve Faulkner taught him how to use the goalie stick in both hands, becoming ambidextrous and he used two catching gloves to foil and confuse shooters. "Steve showed me how to switch the stick from one hand to the other. It wasn't easy at first because I was so young and the stick seemed so heavy. But Steve kept after me and gradually the stick became lighter and I could switch it automatically." He became known as Dr. Strange-Glove.

Durnan then moved to Montreal, as the local senior team from the Royal Montreal Hockey Club (Montreal Royals) wanted him on their team, and offered him a job in the accounting department of Canadian Car and Foundry Company, while he was playing with the Royals.

After three years in the Quebec Senior Hockey League / QSHL he finally caught the attention of a National Hockey League team when the Montreal Canadiens began noticing the goalie star in their own backyard.

"My boss was Len Peto, who was also a director with the Canadiens and a man who knew his Hockey. I hadn't given the NHL a second thought, that incident with the Leafs was still sharp in my mind and I never wanted to go pro. Money wasn't a problem any more, I had a good job and was making a little extra from the Royals, so everything was just fine when Peto started pressuring me to sign with the Canadiens." At this time Durnan was 28 years old, and about to finally embark upon his NHL career.

Up to that point, Durnan had earned at most $15 per week between playing hockey, softball and doing working at the foundry.

"I wasn't ordered to sign, but there's no question that some stress was put on me, which I resisted at first. Somehow I managed to hold out until the day of the opening game and got the Canadiens management to give into my wishes. I signed for the huge sum of $4200 and found myself on a Hockey team just beginning to gel."

Durnan was spectacular in his 1st game, a 2-2 tie against the Boston Bruins on October 30th, and went undefeated in his first 14 games, winning 11 and tying three, setting an NHL record for longest unbeaten streak to start a career.

When Durnan joined the Canadiens in 1943-44, he became part of a team that featured the incomparable Punch Line – Toe Blake, Elmer Lach and Maurice Richard. That season, led by the scoring stars of the Punch Line and the solid goaltending of the rookie, the Montreal Canadiens won the 1944 Stanley Cup championship. Durnan also was named to the NHL's First All-Star Team and was named recipient of the 1944 Vezina Trophy for compiling the best goals-against average (2.18) in the league, the first rookie ever to achieve the feat, going 38-5-7 during the regular season.

Despite the stellar numbers of Durnan, the Calder Trophy was awarded to the Maple Leafs Gus Bodnar, who as an 18 year old, scored 22-40-62 totals to rank tenth in the league in scoring.

In his first four seasons in the NHL, Durnan was all but invincible. He was the NHL's First All-Star goalie each of those four seasons, and also captured the Vezina Trophy in each of the four campaigns, the 1st goalie to do so, while also leading the Canadiens to the best record in the regular season each year, becoming the first NHL team to finish first in four straight seasons. He lost 40 of his initial 200 regular-season games.

In 1946, the Canadiens won a second Stanley Cup championship with Durnan in goal.

During the 1947–48 season, Durnan served as the Canadiens' captain. However, he left the crease so often to argue calls that other teams claimed he was giving the Canadiens unscheduled timeouts. After the season, the NHL passed a rule barring goaltenders from performing the duties of captain, known as the "Durnan Rule." While Roberto Luongo was named "captain" of the Vancouver Canucks in 2008, wearing the "C" on his mask, Luongo had no on-ice rights as such, making Durnan the last goalie to officially serve as captain, and to wear the C on his jersey in the NHL. During the season, Blake had a career-ending broken leg and Durnan had lingering hand pain from breaking his hand in 1945. The Canadiens missed the playoffs in 1947-48 and Durnan earned no awards.

Durnan rebounded the next season, registering NHL career-bests in goals-against average (2.10) and shutouts (10), winning his fifth Vezina Trophy and earning First All-Star Team honors. He also had a shutout streak of 309:21, a modern NHL record that lasted until Brian Boucher of the Phoenix Coyotes broke it in 2004.

An incredible sixth Vezina Trophy and First All-Star Team selection followed in the 1949-50 season, but things came to a head in the 1950 playoffs against the New York Rangers however. The Rangers were on the verge of an upset when they had the Canadiens on the brink of elimination 3 games to 1. Durnan pulled himself from the series.

"I was afraid I was blowing things. I really wasn't, I guess, but we hadn't won a game and I didn't want to be blamed for it. And I felt I wasn't playing as well as I did in the past.. The nerves and all the accompanying crap were built up. It was the culmination of a lot of thinking and I realized 'What the hell, I'm quitting and this is as good as time as any'"

Gerry McNeil stepped in and finished the playoffs.

"A lot of people thought it was a nervous breakdown but it wasn't" Durnan later said.

"Hockey started to get rough for me at the end of the 40's. I had broken my hand and after it mended it felt as if my arm was falling off whenever I'd catch the puck," said Durnan. "One of my main reasons for chucking it all was because the fun was going out of the game for me. A lot of my old pals were leaving - or had gone - and much of the camaraderie was missing."

Durnan also cited the money as a reason he got out of Hockey.

"My reflexes had gotten a little slow and, besides, the money wasn't really that good. I'll admit, if they were paying the kind of money goaltenders get today, they'd have had to shoot me to get me out of the game! But at the end of any given season when I was playing I never seemed to have more than $2000 in the bank, so I wasn't really getting anywhere that way. I wasn't educated and I had two girls to raise."

Durnan was an ambidextrous goalie, equally adept at using his right or left hand (he wore special gloves that permitted him to catch with either hand while still holding his stick), and was a very good stand-up goaltender due to his height, which was considered great at the time (6 ft).

After retiring, Durnan coached the Ottawa Senators of the QSHL in 1950–51, and later the Kitchener-Waterloo Dutchmen of the OHA in 1958–59.

Bill Durnan was inducted into the Hockey Hall of Fame in 1964.

The Arena Bill Durnan, which opened in 1982, is named in his honor.