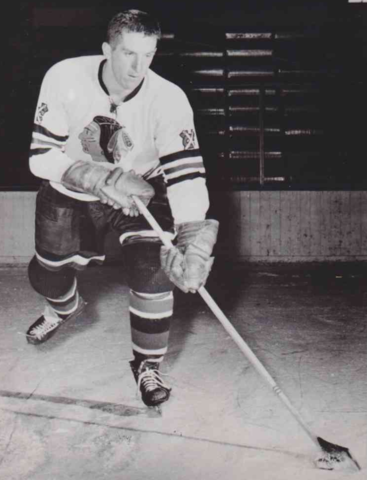 Mazur played his junior Hockey with the Winnipeg Monarchs in 1947-48, helping the team win the 1948 Turnbull Cup, as Manitoba Junior Hockey League champions.

Mazur then played 2 seasons with the Pacific Coast Hockey League / PCHL Victoria Cougars from 1949 to 1951, winning the Presidents Cup (Lester Patrick Cup) as 1951 PCHL champions, the AHL Buffalo Bisons in 1951-52, and back to the Victoria Cougars who were now in the WHL.

Mazur played in the 1951, 1952 and 1953 playoffs for the Montreal Canadiens prior to ever playing a regular season game in the NHL, and became the first player in NHL history to score four playoff goals prior to playing a regular season game. Mazur gained plenty of big game experience while helping the Canadiens reach the finals twice and win the Stanley Cup championship in 1953.

Mazur became a Canadiens regular in 1953-54 season, playing on a line with Jean Beliveau and Bernie Geoffrion, and also Played in the 1953 NHL All-Star Game.
Mazur played eleven post-season games when Montreal lost in the Stanley Cup finals to the Detroit Red Wings in 1954.

The next year, Mazur split his playing time between the NHL and the Montreal Royals of the Quebec League.

After scoring 34 goals for the Western Hockey League / WHL's Winnipeg Warriors in 1955-56, and helping the Warriors win the Presidents Cup (Lester Patrick Cup) as WHL champions, Mazur was acquired by the Chicago Black Hawks, and played 15 games for the Hawks in 1956-57, and would leave the NHL after the 1957 season.

Mazur then spent the next 8 years in the American Hockey League / AHL, playing first for the Rochester Americans, and was a top scorer for the Americans and also a two-time selection to the league's second all-star team.

Rochester traded Mazur in September, 1958 to the Cleveland Barons, where once again he was a team leader in scoring during his 4 seasons there. The Barons sold Mazur to the Providence Reds in September, 1962, playing his final 2 seasons in the AHL there.

Mazur spent the 1964-65 season with the WHL's Victoria Maple Leafs and played a year of senior Hockey with the Grand Forks Flyers before retiring.

Eddie Mazur was Inducted into the Manitoba Sports Hall of Fame and Museum in 1995.