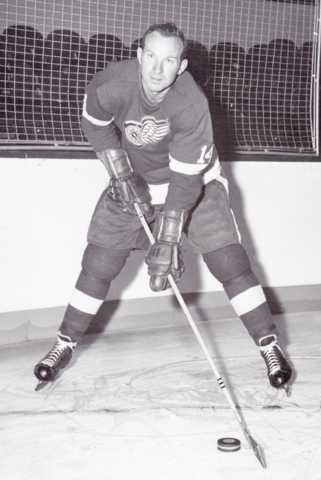 McIntyre played his junior Hockey with the St. Catharines Teepees from 1947 to 1950, having a outstanding final season with them, scoring 30 goals and 26 assists, boy junior career highs.

McIntyre turned pro right away after his junior Hockey season ended, and played the final games of the 1949-50 season with the Eastern Hockey League / EHL Boston Olympics, even getting a 1 game call up to the Boston Bruins.

After scoring 28 goals for the American Hockey League / AHL's Hershey Bears in 1950-51, McIntyre got another call up from the Boston Bruins, and got to play in 2 playoff games during the 1951 Stanley Cup playoffs.

After starting the 1953-54 season in the minors with the AHL Hershey Bears, McIntyre was traded to the Chicago Black Hawks for cash on January 21, 1954, and scored 8 goals in final 23 games of the Black Hawks season.

McIntyre played 65 games for the Black Hawks in the 1954-55 season, scoring 16 goals and 13 assists. The following season he started with the Black Hawks, but was sent to help out the AHL Buffalo Bisons push for the playoffs, where McIntyre scored 17 goals and 19 assists in the Bisons final 27 games of the season, and had 5 assists during their playoff run.

McIntyre enjoyed his best offensive season in 1956-57, as he scored 18 goals and 14 assists for the Black Hawks, as he played in all 70 games that season.

After a slow start the following season with the Black Hawks, as McIntyre had no goals in the first 27 games of the season, he was traded to the Detroit Red Wings by Chicago with Bob Bailey, Nick Mickoski and Hec Lalande for Earl Reibel, Billy Dea, Lorne Ferguson and Bill Dineen, December 17, 1957.

McIntyre finished his NHL playing days in a Red Wings jersey, scoring 40 goals for them over his 3 season in Detroit.

McIntyre next played with the AHL Hershey Bears, leading the team in goals during the 1960-61 season, helping the team to the 1961 Calder Cup finals, where the Bears lost in straight games to the Springfield Indians in the championship finals.

After sitting out the 1967-68 season, the veteran left winger retired after playing one last year of senior Hockey with the Woodstock Athletics.

During the 1965-66 season, while McIntyre played with the Guelph Regals, he coached the junior London Nationals (later Knights) in their first season in the Ontario Hockey League in 1965-66.