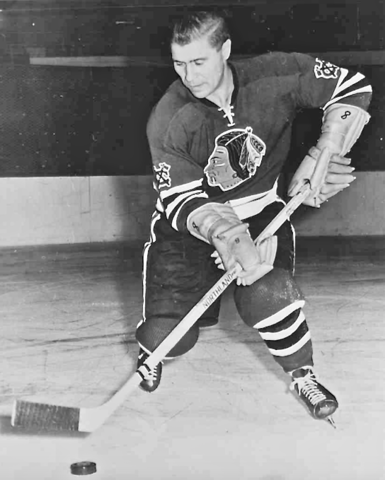 Leswick played his first junior Hockey in Saskatoon with the Saskatoon Dodgers in 1939-40 season. Then joined the Saskatoon Jr. Quakers for the 1940-41 season, helping the Jr. Quakers reach the Abbott Cup final, scoring scoring 7 goals, 4 assists in 12 playoff games.

Leswick then turned pro to start the 1942-43 season the Cleveland Barons of the American Hockey League / AHL, and scored 14 goals, 26 assists as a first year pro.

Leswick was claimed by the New York Rangers from the AHL Buffalo Bisons in Inter-League Draft, June 14, 1945, and quickly established himself as one of the few bright spots in New York. He loved getting under peoples skin, including that of Montreal Canadiens' Rocket Richard, and Gordie Howe of the Detroit Red Wings. Leswick recorded consecutive 20-goal seasons in 1947 (27) and 1948 (24), but the Rangers continued to miss the playoffs or get knocked out in the early rounds. After scoring 44 points in 1949–50, he was named to the NHL second all-star team. During this time, he formed a successful combination with Edgar Laprade and Dunc Fisher.

Detroit had seen the way that Leswick would go after Howe and knew that took guts. They decided to trade for Leswick after the 1950–51 season. On June 8, Tony Leswick became a Detroit Red Wing after a blockbuster trade that saw Gaye Stewart going to New York. Leswick would continue his pestering ways and was inserted on a line with Marty Pavelich and Glen Skov. He would help lead Detroit to Stanley Cup championships in 1952, 1954, and 1955. He is probably most remembered for his winning goal in game seven of the 1954 Stanley Cup finals against the Montreal Canadiens.

Leswick had this to say in an interview with Chuck O'Donnell - "It was early in overtime, I don't know, maybe four or five minutes in. We were trying to change our forwards. I had the puck around centre ice or so and I just wanted to do the smart thing and throw it in. If I get caught with the puck and the Canadiens steal it, we may get caught and they may get an odd-man break. Just like that, the game could be over. So, I'm just thinking of lifting the puck down deep in their end, just making the safe play. So I flipped it in nice and high and turned to get off the ice. The next thing I know, everyone's celebrating. It had gone in. I said, "You've got to be kidding. It went in? Get out of here!"

Defenceman Doug Harvey went back to glove the puck, but instead deflected it past goaltender Gerry McNeil and into the net for the Stanley Cup game-winning goal.

Leswick played in NHL All-Star Game in 1952 and 1954 representing the Detroit Red Wings.

Following his third Stanley Cup victory in 1955, Leswick was traded to the Chicago Black Hawks along with Glen Skov, Johnny Wilson and Benny Woit for Jerry Toppazzini, John McCormack, Dave Creighton and Gord Hollingworth, on May 27, 1955.

Leswick would score 11 goals and 11 assists in the 1955–56 season for Chicago before jumping to the rival Western Hockey League / WHL for the 1956-57 season. The Edmonton Flyers welcomed his 53 points in the 1956–57 season and he was selected to the Prairie Division Second All-Star Team.

Leswick rejoined the Detroit Red Wings for 22 games in 1957-58 season, scoring just 1 goal and 2 assists in his last NHL games of his career.

After Leswick was released by Detroit, he would again join the WHL Edmonton Flyers and play there until the end of the 1958-59 season. He would play 9 games the following season for the Vancouver Canucks of the WHL before retiring from playing Hockey.

Leswick tried his hand at coaching starting in 1958. He replaced the current coach of the Edmonton Flyers midseason in 1957–58 and would continue until midseason of 1958–59. He felt he was more of a help to the team on the ice. He would try his hand at coaching one more time with the Indianapolis Capitals/Cincinnati Wings of the Central Hockey League in the 1963–64 season. They would finish last in the league with a 12–53–7 record and Leswick would retire from the world of Hockey.